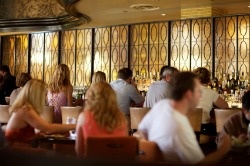 Job openings are expected to be plentiful in the restaurant industry this spring and summer.

As reported by Economy Watch on msnbc.com, the National Restaurant Association announced this week that estimates for summer employment in the industry are expected to exceed the 425,000 positions created in the sector last year.

"Buoyed by continued gains in national employment and an extra day in February as a result of Leap Year, a solid majority of restaurant owners reported positive same-store sales and traffic results," said Hudson Riehle, senior vice president of the research and knowledge group for the association, who was quoted by Central Valley Business Times. "In addition, restaurant operators are bullish about sales growth in the months ahead, while their outlook for the economy remains cautiously optimistic."

Riehle added that restaurant hiring is expected to increase, and only 7 percent of restaurant operators said they planned to reduce staff in the next six months -- the lowest level in nearly eight years.

But the bad news is that such jobs usually do not pay very well, and often do not include health benefits or sick time. "They're better than nothing," said Robert Reich, former labor secretary under President Clinton and author of "Aftershock: The Next Economy and America's Future," who was quoted by msnbc.com, "but it's bad for the economy that such low-wage jobs constitute the major share of new jobs being created in America during this so-called recovery."

Still, others are grateful for the availability of jobs, many which do not require college degrees.

"We are noticing a lot more traffic in and out through the doors. Income has increased, in the last 6 to 8 months," said Lara Sayegh, a nursing student who works as a waitress in Springfield, Massachusetts, who was interviewed by WWLP News 22. "If you have the right personality and the right people skills, you can definitely make it in this industry."

The National Restaurant Association confirmed that traffic has increased at restaurants: Of the restaurant operators polled, 55 percent said they saw higher customer traffic levels between February 2011 and February 2012. Only 19 percent reported a decline in traffic.

The association also said that annual job growth in the sector is expected to increase by 2.3 percent this year. Last year, jobs grew by 1.9 percent.

"Jobs Are Being Added in the Restaurant Industry," wwlp.com, April 2, 2012, Yoojin Cho