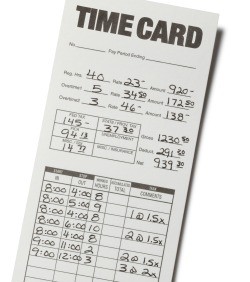 CBS News reported that on Wednesday, May 8, the House of Representatives passed the Working Families Flexibility Act, a measure that would allow employees to substitute overtime pay for compensatory time off when they work more than 40 hours in a week. The bill passed 223-204, with only a small number of Democrats voting in favor of it.

Reuters explained that under the Working Families Flexibility Act, employees who choose to trade in overtime pay for time off would receive 1.5 hours for every hour of overtime that they work -- a regulation that is already in place for public sector workers. The measure would amend the Fair Labor Standards Act, under which, The Huffington Post noted, hourly employees are given time-and-a-half pay for overtime. This policy serves the dual purpose of rewarding those who work extra and inhibiting employers from working people too much.

Rep. Martha Roby (R-Ala.), who sponsored the act, voiced her party's claims that the bill intends to help families: "This is about helping working moms and dads, providing the ability to commit time at home. This is something that the public sector has engaged in for many many years. If it's good enough for the federal government, it ought to be good enough for the private sector." Labor advocates, however, are worried that because the measure would decrease overtime costs to employers, employers would pressure workers into opting for comp time in lieu of additional pay. Rep. Donna Edwards (D-Md.) claimed that the comp-time policy is effective for the public sector because those employees typically have unions and protections.

A statement issued by the White House recommending a presidential veto of the bill voiced Democratic concerns: "This legislation undermines the existing right to hard-earned overtime pay, on which many working families rely to make ends meet, while misrepresenting itself as a workplace flexibility measure that gives power to employees over their own schedules." Sen. Tom Harkin (D-Iowa) added, "I think this is the wrong approach to the very critical problem of helping workers balance job responsibilities with family and caregiving." He suggested that the House instead review his measure on mandated paid sick leave.

In response to Democratic statements against the act, Roby told CBS News that the bill "doesn't undermine overtime pay, because if an employee wants overtime pay for time they've worked beyond the 40 hour work week, under this law they are certainly entitled to that." She used herself to exemplify how the bill could benefit working parents: "As a mom that wants to be there for the PTA meeting or for the swim meet, to have that flexibility is huge."

Reuters noted that because there is such high Democratic opposition to the measure, the bill is not expected to move further than the Senate.