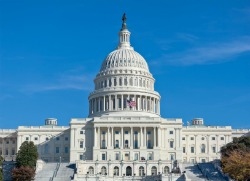 On Friday, the House of Representatives passed a bill that would prevent federally-subsidized Stafford loan interest rates from doubling from 3.4 to 6.8 percent this summer. But the Republican-sponsored legislation is almost guaranteed to fail in the Senate, because the bill relies on funds for preventative health care to pay the $6 billion cost for keeping the interest rate low.

As The New York Times explained, the conflict between House Democrats and Republicans was "less over the substance of the bill than how to pay for it, with Republicans, as they have all year, looking to cut government spending and Democrats, as has been their approach, looking to extract more money from high earners."

As reported by The Chronicle of Higher Education, the bill passed 215 to 195, even after the White House threatened to veto it. Democrats such as California Rep. Nancy Pelosi claimed the bill was an "assault on women's health." House speaker Rep. John Boehner of Ohio, meanwhile, faulted the White House and Democrats, whom he said had needlessly "picked a fight" on the issue.

But Democrats insisted that Republicans were indeed using the opportunity to cut a health program that would help thousands of women. By contrast, House Democrats have proposed paying the $6 billion cost by cutting subsidies to oil companies. Senate Democrats, meanwhile, have proposed legislation that would raise the necessary funds by tightening taxes on wealthy business owners.

"They're using the student loan issue to drive their agenda," said California Rep. Henry Waxman, a Democrat, who was quoted by The Huffington Post. "I find that very cynical. I find that in fact quite repulsive. They're not looking for a better way. They're just looking for a way to cover their rear ends."

"That's the work of Congress now," agreed Rep. Peter Welch, a Vermont Democrat who was quoted by The New York Times. "They go to their trick bag, which is to eviscerate the health care bill. We go to our trick bag, which is to vilify the oil companies, and nobody in the country cares. But what they do care about is getting whacked because they can't pay college costs."