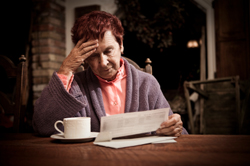 House Republicans rejected a bill on Thursday that Democrats hoped would extend unemployment benefits for millions of Americans for three more months.

According to CNN Money, the bill would have extended the deadline to file for federal unemployment benefits to February 28. Federal benefits kick in after 26 weeks of state funded coverage has expired. These benefits are divided into tiers and the unemployed must apply each time they transition into a new tier. The current deadline is November 30.

As The Wall Street Journal pointed out, Democratic leaders wanted to spare some four million Americans from losing benefits and, therefore, presented the bill under fast-track procedures, which required a two-thirds approval.

The 258-154 vote fell short as Republicans refused to add the $12 billion cost of continuing the program to the deficit.Lawmakers expect to reach a compromise, but not until after the program expires. As a result, 800,000 unemployed Americans will lose their benefits by November 30 and two million by the end of December.

"This bill is like deja vu all over again, and not in a good way," said Representative Charles Boustany (R-LA) to Bloomberg. There was a similar impasse last summer.

"The message to four million Americans will be the Republican Party doesn't care whether you have a Christmas or a way to fund your mortgage or a way to put food on the table for the next three months," said Representative Jim McDermott (D-WA) to The Wall Street Journal.

For advocates, it only makes sense to extend the program as the unemployment rate stands at 9.6 percent, with some 6.2 million people who have been without a job for more than six months, reported CNN Money. Some, however, have said that prolonged benefits are a disincentive for the jobless. Those without a job have received far more support than those affected by the recession of the mid-1970s as benefits now last 99 weeks. So far, the unemployed have collected $319 billion in benefits over the past three years.

Lawmakers who support the extension argued that unemployment benefits are not only important to families, but the economy as well. "Terminating this emergency unemployment assistance will not only devastate families, but it also will hurt the entire economy by depressing consumer confidence and demand," said Representative Sander Levin (D-MI).

Indeed, CNN Money noted that a Joint Economic Committee (JEC) report showed that the unemployed generate economic activity because they spend their benefits immediately rather than save. Ending the extension program would have a devastating chain reaction: the unemployed would stop stimulating the economy, which would drain the economy of $80 billion, causing more than one million workers to lose their jobs over the next year.

As The Wall Street Journal reported, Republicans do want to extend the benefits; they just do not want to add to the deficit. "What we heard earlier this month is that people want us to provide help to those in need but not add to the mountain of debt," said Representative Boustany.