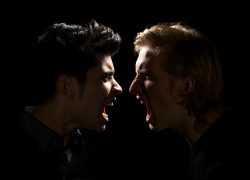 According to The New York Times, housing officials across the nation say that today's college students lack the skill to address simple roommate conflicts. "We have students who are mad at each other and they text each other in the same room. So many of our roommate conflicts are because kids don't know how to negotiate a problem," said Tom Kane, director of housing at Appalachian State University in Boone, N.C.

The problem seems to be worst among freshmen and has continued to escalate in the last five years. Not too long ago, students were able to sit down with each other and their R.A. to discuss issues, but not anymore. "We don't have a lot of mediation. We have a lot of avoidance," said Dana Pysz, an assistant director in the office of residential life at UCLA.

Recent focus groups at North Carolina State University showed that students do not confront noisy floor mates, confirming that students prefer to avoid confrontation. "It was clear from the focus groups that the students expect the R.A.'s to keep the floors quiet," said Susan Grant, NCSU's director of housing.

Furthermore, requests for room changes from unhappy students have significantly increased. The New York Times reported that five years ago, only five to 10 students at Marist College, in Poughkeepsie, N.Y., would request a switch after the first six weeks; now it receives 30 to 40 requests and has even had to assign more staff members to regulate freshmen dorms, where conflicts break out two or three times a day during the first weeks of school or more during exam weeks. Loyola University in Chicago now receives so many requests that the school created "swap nights" where dissatisfied students could search for potential new roommates.

Administrators believe that cell phones and the Internet have made it easier for students to avoid problems and react in passive-aggressive ways, such as complaining via Facebook.

However, students may just be less empathetic. According to another article in The York Times, a study found that "college students today are 40 percent less empathetic than those of 30 years ago", with the biggest drop after 2000.Researchers found a 48 percent decrease in empathic concern, defined in the study as sympathy for others. There was a 34 percent decline in perspective taking, or the capacity to understand another person's points of view. Dr. Sara Konrath, author of the analysis, speculated that video games, social media, reality TV and hyper-competition may be some of the causes.

Whatever the reasons, students may be forced to work things out as many campuses cannot accommodate room changes. Iowa State Daily provided a few suggestions to help alleviate roommate tension. Joshua Bruecken, who is a House Community Adviser at one of the university's residence halls, stated that conflicts often occur "because one party is unaware that something is an issue". Bruecken stated that communication is essential and recommended contacting your roommate before moving in to get to know one another. After moving in, spend some time to set up rules and reasonable boundaries. "Talk to your roommate about general rules that you want followed, like quiet hours when one of you needs to study, things like that," suggested Elizabeth Antol, a student at ISU.

Bruecken also advised students to talk about disagreements immediately and if things get out of hand, get your R.A. involved. "We're here to help out, that's what we're trained to do," he said.

Lastly, be considerate--clean up after yourself and respect your roommate's space. Sharing a room may be a big adjustment for some students, but it is important to remember that you are not the only one living there.

"Dispatches From the Frontlines of the Roommate Wars," NYTimes.com, July 22, 2010, Jacques Steinberg