How Companies Are Addressing Workplace Distractions 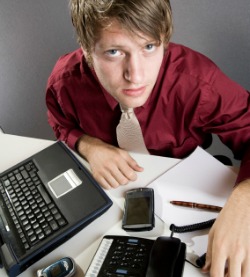 The problem of distracted, multitasking employees is on the rise, leading to decreased efficiency in the workplace, reported The Wall Street Journal. Interruptions take the form of co-workers asking questions or wanting to talk in person or electronically, attention-grabbing cell phone calls or texts, social media network postings, and even the dual screens that many employees have at their desk to supposedly enhance productivity.

"It is an epidemic," Lacy Roberson, director of learning and organizational development at eBay, told The Wall Street Journal.

Studies have revealed that workers are interrupted, by themselves or others, approximately every three minutes. Once off-task, an employee may need about 23 minutes to get back to work, according to Gloria Mark, an informatics professor at the University of California, Irvine, who studies electronic distractions. According to a 2011 survey, lost productivity due to workplace distractions and inefficient technology can cost companies over $10 million a year, reported The Huffington Post.

Some companies are realizing that they are partly to blame for employees’ increased levels of distraction, and are instituting policies to restore quality working time, wrote the Wall Street Journal. Abbott Vascular, a subsidiary of the health care firm Abbott Laboratories, trained employees to categorize e-mails by importance and respond to the urgent and complex ones by telephone and the ones that could wait by e-mail. Now, workers are better able to prioritize e-mails and act accordingly. Similarly, EBay's Roberson initiated a no-electronic-devices policy at certain meetings, which has improved efficiency.

Managers at Intel Corp.'s software and services group launched a program providing employees with blocks of time, four hours per week, to do nothing but think about projects. Since the start of "think time" in the fall, one worker has developed a patent application during those focused hours. Others have used it successfully to catch up on unfinished work.

According to Forbes, other strategies for getting employees' undivided attention include providing a snippet of information at the start of a meeting or dialogue and holding the rest until the end. Similarly, a manager could ask an intriguing question at the start and tell participants they'll need to provide an answer by the end. Forbes also suggests that workers better control their own distractions by thinking of each project as a puzzle requiring a solution. This approach often gets people so involved in finding the solution that they block out external stimuli while tackling the challenge at hand.

Reducing the variety of projects employees are required to work on in a day has also been proven to help decrease workplace distraction. Management at Warner Robins Air Logistics Complex in Georgia decreased the number of planes under repair at one time because workers had fallen behind schedule, The Wall Street Journal reported. With employees’ attention divided between many different planes, all of which had different problems, management realized that allowing workers to focus on just a few planes at a time would help increase productivity. The change in work flow led to a significant improvement: 97 percent of projects now are completed on time.

"When you are focused on just a few things, you tend to solve problems faster," Doug Keene, vice director of the complex, said. "You can't disguise the problem by looking like you're really busy."