How Posture Can Hurt or Help Your Career 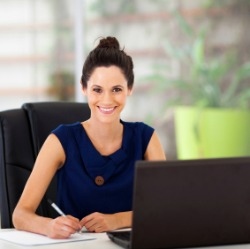 We have all been taught that hard work and determination are the keys to professional success. Though that still holds true, recent research shows that our body language might be just as important.

As reported by The Wall Street Journal, research showed that posture can actually help or hurt your career. For example, striking a "power pose" -- standing tall and leaning slightly forward with your hands at your side or leaning forward over a table with your hands firmly on its surface -- can increase testosterone and decrease cortisol; hormonal changes that can lead to better performance and more confident, assertive behavior.

The concept of power posing is not entirely new. In 2010, HBS Working Knowledge reported that Harvard Business School professor Amy J.C. Cuddy and Dana R. Carney and Andy J. Yap of Columbia University conducted an experiment in which subjects were randomly assigned a high- or low-power pose. After striking the pose, the researchers evaluated each groups' risk tolerance by giving the subjects $2 and a chance to roll a die to win $4. Participants were also asked to indicate how powerful they felt on a scale from one to four. Saliva samples were taken before and after posing, in order to measure testosterone and cortisol levels.

As The Wall Street Journal noted, other studies have shown similar results, with participants who took on high-power poses exhibiting more confidence and a greater tolerance for risk than counterparts who took on low-power poses such as slouching or leaning back with arms or ankles crossed. A recent study even found that subjects hunching over a hand-held device, such as a smartphone, to complete assigned tasks were less likely to interrupt another person, even when instructed to do so, suggesting that the low-power posture made the subject feel powerless.

Posture, however, can affect not only how we feel about ourselves, but also how others perceive us, particularly in the workplace. According to The Wall Street Journal, one study published last year showed that participants who struck a power pose for several minutes before a mock interview received more positive reviews from evaluators and were more likely to be hired, even though the power poses were done in private.

Refinery29 noted, however, that maintaining an assertive posture can sometimes be difficult in modern-day society.

"One of the things that happens with people in our day and age is that we tend to gaze downward because of the demands of our busy culture," explained Donna Ray, psychotherapist and Feldenkrais Method movement specialist, in Refinery29. "People are looking down at their computer and phone screens. They're also looking down at the sidewalk, to make sure they don't trip -- or because they don't want to look into the eyes of other people who are walking around them."

Ray, like many other researchers, pointed out that it is important to be aware of your posture, particularly at work, as better posture can improve our moods, boost energy and help us become more alert; all of which can enhance performance at the office. In HBS Working Knowledge, Cuddy noted that it ultimately comes down to the way we connect with others.

"People often are more influenced by how they feel about you than by what you're saying," said Cuddy. "It's not about the content of the message, but how you're communicating it."