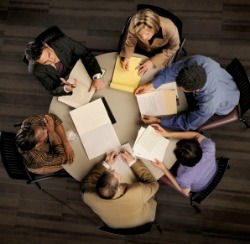 Through their efforts to benefit people’s lives via missions such as making higher education more accessible and inspiring youth to start their own community-oriented campaigns, social entrepreneurs are redefining what it means to lead profitable business ventures. In fact, many social entrepreneurs assert that their companies can positively impact society even more dramatically and efficiently than non-profit organizations already in the philanthropic space.

In their interview with The Chronicle of Higher Education, Coursera founders Daphne Koller and Andrew Ng explained their view that Coursera’s standard C Corporation status (which indicates that they are held accountable to make a financial return on their investors’ funding) actually helps them better and more efficiently achieve their mission. “It turns out that we’re able to find resources much more easily as a company than as a nonprofit.”

Ms. Koller added that, in today’s business world, the assumption that only non-profits have positive social impact as their primary goal is being challenged. “I just read the Time magazine article about nonprofit hospitals charging egregious amounts for Band-Aids,” she told The Chronicle of Higher Education. “It comes down to who’s running it and what their intent is.”

Other startup founders agree with this view that the business space is changing. “This generation of entrepreneurs were actually raised very idealist,” 32-year-old Michael Staton, who founded the company Inigral, told The Chronicle of Higher Education, “I always felt that I was getting sold this idea that I could change the world—as far back as I could remember.”

It is not surprising that many young people set out to create companies whose main goals are to both generate revenue and benefit society, as many independent companies and college-based organizations currently exist whose aim is to inspire enterprising individuals to change the world. For example, according to Northern Illinois University’s student newspaper The Northern Star, the university’s Collegiate Association of Unreasonable Social Entrepreneurs (CAUSE) hosted its first Social Impact Summit last week, featuring social entrepreneurs as speakers.

“It’s a really innovative and different way to think about business,” said NIU senior Kyle Lundin, who attended the Summit, “One of the speakers [said] you can have a successful business and still have a mission, and [talked about] how business is shaping that way. […It’s] cool to see these forefront thinkers paving the way and connecting for-profit business with helping other people and having a mission.”

Other colleges and universities have similar programs that promote entrepreneurship coupled with a sense of social purpose. For example, according to Forbes, Brown University’s Swearer Center has a Social Innovation Initiative that focuses on guiding young entrepreneurial students through the process of obtaining funding, networking, and realizing their visions. Furthermore, Middlebury College has a Center for Social Entrepreneurship that offers enterprising students guidance, grants, fellowships, symposiums, and discussions lead by leaders in the social entrepreneurship field. Such programs aim to help students find their career purpose while giving them the tools to achieve their aspirations. In doing so, they help ensure that social entrepreneurship will play an increasingly prominent role in the American economy in the coming years.