How Social Media Is Redefining the Resume 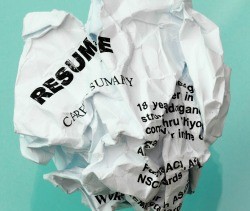 Resumes have long been the standard way in which job applicants illustrate their qualifications to potential employers. However, the rise of social media in the corporate world is shifting the emphasis from the resume’s static representation of qualifications to a more interactive way of finding and recruiting new talent. CNN reports that many hiring managers are now turning to job candidates’ online presences—LinkedIn, Facebook, and Twitter profiles, as well as their Google search results and any web content they have written—rather than relying solely on a list of experience, education, and achievements. Some companies even ask candidates to actively integrate social media into their job applications.

CNN cites the perspective of Gretchen Gunn, a principal at the recruiting company MGD Services, to help illustrate the evolving roles of the resume and the web in the job search. Gunn stated, “The concept [of the resume] is not changing. That document, your life history of your work, isn’t ever going to be obsolete. It is the vehicle that is changing.” CNN explains that this “vehicle" has progressed from a static paper document to incorporate a mish mash of various social media sites and web content, particularly for tech companies. For example, the New York venture capitalist firm Union Square Ventures asked job applicants to provide them with a “Web presence” in lieu of a resume. ”This could be anything from a Twitter account to a blog or Tumblr to a project you hacked together,” explained Union Square’s Christina Cacioppo to CNN.

Other companies are following in a similar vein. Forbes reports how, for its “Cashless Society” campaign, Mastercard asked applicants to use a social media site (such as YouTube, Facebook, or Pinterest) to explain the personal significance that a “cashless society” had for them.

For their part, job applicants are increasing and honing their own web content to represent their interests, personality, and career experience. CNN cites the example of Rachael King, a community engagement employee at Adobe, who crafted a multidimensional “Living Resume” on Pinterest. This web-based resume consisted of, in King’s words, “an ongoing collection of decidedly cool things I’ve done in my career, side gigs, and other projects.” Still other candidates are using their internet and social media savvy to gain an edge in the job market. For example, Forbes reports how an applicant to Mastercard’s internship program created a successful Tumblr blog entitled “Cashless ‘til May” in response to the company’s “Cashless Society” recruiting campaign.

The increasing role of social media content in the recruitment and hiring processes, however, has raised concerns about candidates’ privacy and just how much information they should make public on the Internet. Forbes’ Lisa Quast reports the results of Eurocom Worldwide’s 2012 annual technology market survey, which found that “[a]lmost one in five technology industry executives say that a candidate’s social media profile has caused them not to hire that person.” Thus, job applicants should keep in mind that their social media content can be as much an interference to their career as a boon.

Considering the addition of social media to one’s job qualifications, one might think that putting time and effort into crafting a well-honed conventional resume is not worthwhile. Alas, such is not the case. For many companies, the expectation of a well-written resume that illustrates one’s qualifications is still present. However, the latest news on the role of social media in the job market indicates that also taking time to develop one’s online presence could pay back dividends.

“How Your Social Media Profile Could Make or Break Your Next Job Opportunity,” forbes.com, April 23, 2012