Hurricane Sandy Aftermath: How Employers Handled Pay and Days Off 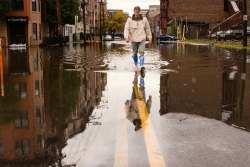 Hurricane Sandy kept many residents of Eastern regions from making it to work for several days, but the biggest impact may be on individuals with low-wage jobs that pay by the hour. Many of these workers were concerned about lack of pay because their places of business were shut down or they were unable to get to work due to transportation difficulties.

As reported by The Huffington Post, one Brooklyn, N.Y. couple, both employed at a gift shop paying them $11 an hour, waited anxiously at a bus stop on Thursday. The couple had already lost a total of $400 in wages because of the storm. Another man traveling from Coney Island to Midtown New York City had spent two hours commuting without reaching his destination, but needed to be at his newsstand since he had already missed three days of work.

"Non-salaried workers are really at the mercy of their employers," Ross Eisenbrey, vice president of the Economic Policy Institute, told The Huffington Post.

Under federal law, companies must pay hourly employees only for time worked unless an agreement such as a union contract or state laws indicate otherwise, Harley Storrings, an employment lawyer with Arnstein & Lehr, explained in The Wall Street Journal. Salaried employees must be paid even if the workplace closes due to a natural disaster; however, days off may be counted as vacation days or managers may deduct pay for time off.

"My guess is most professional employees, such as salaried workers in the legal or financial industry, are either working from home, have made it in to the office, are in phone contact, and their salaries will be intact more or less," Frank Braconi, chief economist at the New York City Comptroller's Office, said in The Huffington Post. "But for hourly paid workers, such as the delivery boy or the shop attendant, the situation is going to be much more tenuous. And a third group, the self-employed, are probably the most vulnerable to the storm and its aftermath, as their business may have come to a literal standstill."

For some employers, however, the storm provided an opportunity to show their generosity and understanding during a time of crisis. AOL Jobs described how JetBlue Airways Corp. helped employees find hotel rooms or provided extra services to those who had lost homes. Jason Goldberg, CEO of Fab.com, offered his home to 15 employees who were affected by power outages and gave all employees a $50 bonus for each day the office was closed. Other employers offered pay for missed time, noted The Wall Street Journal. For example, when Starbucks staff at a midtown Manhattan location heard they would be paid in full for missed hours, they were overjoyed, said Manager Christine Edwards. Firms like Morgan Stanley and Advisory Board Co. also paid both salaried and hourly workers whether or not they made it to work.

"We're not going to dock them for something that's beyond their control," Robert Musslewhite, CEO of Washington, D.C.-based Advisory Board Co., commented in The Wall Street Journal. "Stuff happens, you know?"

Some companies were sympathetic, but to an extent. Madison Square Garden Co., for instance, set a limit on the number of days employees could miss work before being docked for pay. Likewise, PNC Financial Services Group gave affected employees five days of extra time off, but if they needed more, they had to dig into vacation or personal time, noted The Wall Street Journal.