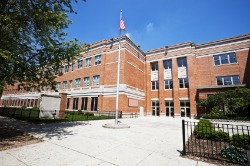 "Enacting education reform has been one of my top priorities as Governor, and one of my administration's main objectives for the spring legislative session," Quinn said at the signing, as reported by The Huffington Post. "These historic reforms will help us make sure that students across Illinois learn from the best teachers."

The law, known as SB7, has been hailed by US Secretary of Education Arne Duncan as a model of collaboration and by other federal officials as a model for state-led education reform. "While some states are engaging in noisy and unproductive battles around education reform, Illinois is showing what can happen when adults work through their differences together," Duncan told The Huffington Post.

A bipartisan initiative, SB7, brought together teachers unions, school boards and reform groups from the beginning and ultimately passed in a Democratic legislature. Two major changes rest in the heart of the reform: new tenure standards and the ability for school districts to remove underperforming teachers. Crafted out of negotiations led by Sen. Kimberly Lightford (D-Maywood), the legislation states tenure can only be obtained after four years of service and a series of proficient reviews reports the Chicago Sun Times. In addition, the law allows for the top-rated educators to be put into a fast-track for tenure after three years--without having to wait for the fourth year. This follows a push from school districts to tie teacher reviews to student performance.

Cynthia Brown, VP of Education Policy at the Center for American Progress told the Huffington Post: "There's quite a bit of momentum around these issues of evaluation and issues of how you identify and support teachers who aren't as effective as they need to be." Secondly, school districts must consider a teacher's specialty, performance and qualifications when deciding on which teachers stay and which teachers are removed from the classroom, per the Chicago-Tribune. Seniority would break any ties. This change likely will go into effect in most school districts in this next year.

In addition, SB7 also outlines new rules regarding strikes and the length of school days. According to the Chicago Tribune, suburban school districts, and downstate unions and school boards must meet with a mediator to disclose their best offer prior to any strike. The Chicago Sun-Times notes strikes in Chicago would have a 120-day waiting period from the date the impasse moves to an advisory panel. The Chicago Teachers Union must also have support from at least 75 percent of its bargaining members and provide at least 10-day notice of a strike. Dan Montgomery, president of the Illinois Federation of Teachers told the Chicago Tribune that "I think that will have a positive effect. It works both ways. The public will know more."

Chicago Public Schools also now have powers to impose longer school days as well as lengthen the school calendar. According to the Sun-Times, city schools in Chicago have the shortest school day of any major school district in the US. Yet, when longer school days will be implemented is still in the air, notes the Chicago Tribune. The teachers union may try to bargain for additional benefits or pay if additional instructional minutes are added.

Amidst state budget woes, carrying out this legislation is the new challenge. The Chicago Tribune reports Illinois owes public schools $1 billion in unpaid bills, and spending plans call for cutting education funding by $171 million. The Chicago school district alone faces about a $720 million budget shortfall next year. "How this bill is going to get implemented is still a big question mark to everybody," Jennifer Cline told The Huffington Post. She is the communications director for New Schools for Chicago, an organization dedicated to making great public schools available to every Chicago student.