Illinois Runs Out Of Financial Aid For College Students Early 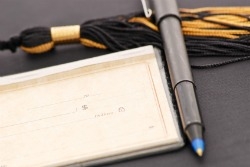 An estimated 140,000 eligible Illinois college students won't receive grants for the 2012-2013 school year because funds from the state's primary source of financial aid have run out.

"It's a sign of incredible demand more than anything else," John Samuels, spokesman for the Illinois Student Aid Commission, the agency that administers the Monetary Award Program (MAP), told the Chicago Tribune.

The state's MAP monies, for prospective and existing college students, are awarded on a first-come, first-serve basis. All of the available funds, $387 million, were disbursed to students who applied by March 13, about 140,000 to 145,000 of them.

Consequently, the ISAC stopped issuing funds as of March 14, the earliest cutoff ever. (Last year, MAP money ran out on March 21, CBS Chicago noted.) The commission alerted colleges Friday that further applicants won't be eligible for grant awards, and the schools in turn notified students.

The insufficient amount of state financial aid will affect Illinois' neediest students the most, according to critics and school officials, The Huffington Post reported.

This year, 40,000 more students applied for MAP aid compared with the same time last year, making it a record number, according to the Chicago Tribune. Five years ago, students who applied as late as August received grants.

Before the ISAC suspended grants for the 2012-2013 school year, it reduced the maximum award of $4,968 to help offset fewer available funds and increased demand.

Gov. Pat Quinn has proposed providing ISAC with an additional $50 million so that another 35,000 students could get grants averaging $2,700. However, Samuels said, the state would need to provide $1 billion to award every eligible student a MAP grant.

Students who missed the March 13 deadline for MAP funds still should complete the Free Application for Federal Student Aid, or FAFSA, at fafsa.ed.gov, noted The Huffington Post.

Funding shortages like this are linked to rising college costs, particularly at in-state schools. The University of Illinois, for example, blamed decreased state funding for the 4.8 percent tuition increase it plans for next year. That increase would raise annual tuition costs to more than $24,000 at the Urbana-Champaign campus.

Also, At DePaul University, students have been fighting administrators over a proposed 5 percent tuition increase for new students and a 2.2 percent increase for current students.

"When you start to look at choices you have regards to spending, I don't think there's any question with regards to public safety and education opportunities for not just young-young people but mature older people," Rutherford was quoted as saying in The Huffington Post. "We need to start to prioritize, and those two are very important to have happen."