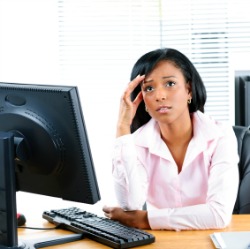 Have you ever felt like a fraud in the workplace? A sham, undeserving of whatever praise or promotions come your way? Good news: You are not alone. That feeling has a name, and usually means that that you are actually pretty great at your job.

The fraudulent feeling successful people have when they achieve in the workplace is called imposter syndrome, reports Pacific Standard, and it is common among high-achieving professionals. These workplace stars feel like they have cheated their way to the top, no matter how much work they have done or how much experience they have acquired. Imposter syndrome thrives in competitive workplaces with few mentors able to provide a "reality check," which, Pacific Standard notes, is a fairly apt description of the post-recession U.S. economy.

According to Slate's The XX Factor, imposter syndrome is not a novel phenomenon. It can be traced back to a 1978 paper by psychologists Pauline Rose Clance and Suzanne Imes, and has been found to impact big names like World Health Organization chief Dr. Margaret Chan, Facebook's Sheryl Sandberg and up to three-quarters of Harvard Business School students. Anyone can suffer from imposter syndrome, but it is especially common among women. Studies show that female employers apologize more -- not because they like apologizing, but because they set their apology thresholds lower. They are also more likely to give themselves poor performance reviews, even though hiring managers tend to rate women more highly than their male colleagues. Slate suggests that part of the problem is that women tend to attribute their achievements to external factors, like luck or supportive coworkers. Successful women in male-dominated fields may also feel like trailblazers with more to prove, so set the bar higher for themselves.

Nonetheless, imposter syndrome can affect both men and women, and according to Dr. Jennifer Howard, psychotherapist and author of the award-winning book "Your Ultimate Life Plan," its root cause can often be traced to childhood.

"[They] are stuck in some limiting beliefs from their childhood programming. Something from the past created an environment in which they weren't able to know who they really are or their innate value," Howard told CityTownInfo. "If they were more connected to themselves and understood their inner life well, with all their thoughts and feelings, it would be easier to own all of themselves including their power, value, and their vulnerability."

Tom Ingrassia, a former assistant dean of university business school who now runs his own personal and professional development training company, is inclined to agree. Ingrassia -- who just finished his first book, "One Door Closes: Overcoming Adversity By Following Your Dreams" -- told CityTownInfo that he suffered from imposter syndrome most of his life, and it all began when, as a child, adults quashed his dreams of becoming a performer.

So, how does imposter syndrome affect its victims, apart from making them feel anxious or discouraged? Howard said for some professionals, this fear is a great motivator. They work harder, in order to feel more adequate, and actually end up achieving more. For other professionals, that fear is paralyzing, and they may consider leaving their fields entirely. Such is the case for Dan Nainan, an accomplished stand-up comedian who has performed for such big names as Hillary Clinton, Donald Trump and even President Barack Obama.

"I've been telling my friends I want to get some sort of menial job like McDonald's or something -- and have even applied -- because I'm feeling a bit guilty about earning $15,000-$20,000 for corporate events," Nainan told CityTownInfo.

How do successful people like Nainan overcome the barrier of imposterism? Howard advises them to begin by acknowledging their achievements -- and learning how to take a compliment.

"We miss out on those great moments when we worry about our incompetence," said Howard. "When receiving a compliment, acknowledgement, or award, allow it to sink in. Look back on your efforts, and acknowledge yourself for your hard work and persistence."

Howard also recommends allowing yourself some room for mistakes, since the fear that you cannot do something correctly could overwhelm you and, eventually, become a self-fulfilling prophesy.

"Remind yourself that as a human being you're going to make mistakes sometimes and it will help you grow," said Howard. The more you can make room for your mistakes, the more room there is for your successes.

"Not Qualified for Your Job? Wait, You Probably Are," psmag.com, October 22, 2013, Anne Friedman, http://www.psmag.com/business-economics/qualified-job-wait-probably-imposter-syndrome-psychology-68700/