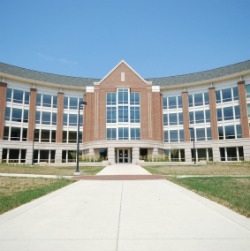 The president of Indiana's Ball State University, Jo Ann Gora, announced this week that the public school no longer would teach intelligent design, or creationism, in science classes or espouse it as truth, The Huffington Post reported. Intelligent design, which rejects evolution, posits that an intelligent force rather than an uncontrolled process like natural selection is behind creation of the universe and living things. Gora's statement was in response to a complaint received about a particular BSU professor and his curriculum.

The action was in response to a letter from the Freedom from Religion Foundation that expressed concerns that Eric Hedin, assistant professor of physics at BSU, perhaps was violating separation of church and state by the way he was teaching intelligent design in an honors science class, "The Boundaries of Science," according to Inside Higher Ed. The foundation objected to Hedin reportedly sharing his personal beliefs and sanctioning a Christian view over others.

Intelligent design can now be discussed at BSU in social science and humanities courses that focus on religion, but can't be given more weight than other viewpoints, The Chronicle of Higher Education noted. Permitting this topic to be presented in a science class as a valid scientific theory wouldn't accurately represent the scholarly science community and, therefore, would fall short of the required academic standard. Therefore, the issue isn't a matter of academic freedom, Gora said, but, rather, academic integrity.

The school is working to ensure Hedin's courses remain free of intelligent design discourse, and Hedin has been cooperative. It's unknown whether or not he'll continue teaching "The Boundaries" course.

The Freedom from Religion Foundation is pleased with Gora's position, as is Jerry Coyne, a professor of ecology and evolution at the University of Chicago whose blog is called "Why Evolution is True," Inside Higher Ed explained. Coyne had published a blog in April, accusing Hedin of teaching religion in a science course, which sparked the intelligent design issue at BSU. Regarding Gora's announcement, Coyne told Inside Higher Ed it was "a magnificent statement. It was strong, unequivocal, and there was a lot to like about it."

However, the Discovery Institute, which promotes intelligent design, disagrees. The group's president, John West, said Gora's stance is "anti-academic freedom and Orwellian in the extreme" and a "gag order" on faculty who believe intellectual design has merit.

"Academic freedom was designed to protect dissenting and unpopular views among faculty," he added. "Redefining it as the freedom to teach only the majority view isn't academic freedom; it's an academic straitjacket."