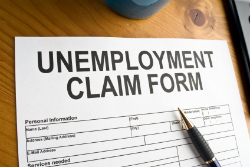 First-time unemployment claims rose unexpectedly last week, demonstrating that although the job market is healing, the road to recovery is still bumpy.

CNN Money reported that initial jobless claims went up to 412,000 in the week ended April 9, an increase of 27,000 from the previous week. This is the highest increase in two months and came as a surprise to economists, who were expecting 385,000 new claims.

According to MarketWatch, a Labor Department spokesman explained that claims usually increase the week after the end of a quarter as workers tend to file claims during a new quarter to get higher benefits. Nonetheless, economists predict that claims will drop again.

"Given then underlying downward trend we are inclined to see it as a one-time fluke," said Ian Shepherdson, chief U.S. economist at High Frequency Economics.

Indeed, although the spike in initial claims is larger than usual, before the latest week, claims remained below 400,000 since the beginning of March.

Bloomberg reported that despite the increase in initial claims, the number of Americans who filed ongoing claims--claims that are filed each week after an initial claim until the end of standard benefits--decreased by 58,000 to 3.68 million in the week ended April 2, which is the lowest figure since September 2008.

Those who receive emergency or extended benefits increased by more than 40,000 to 4.31 million in the week ended March 26. These extended benefits are offered by the U.S. government after unemployed workers have used up state benefits.

MarketWatch pointed out that although the labor market is healing, companies need to pick up the pace when it comes to hiring. Before the recession, 146.6 million people were employed. As of March, just 139.9 million have jobs. Furthermore, while the unemployment rate has dropped significantly in the last six months, it is still almost double the rate it was before the recession started in 2007.