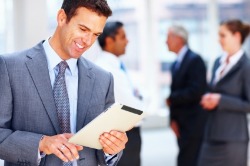 As the fervor for the Apple iPad continues to grow among consumers worldwide, the trendy digital device is beginning to make an impact at university MBA programs.

Although many criticize the presence of the iPad in business classrooms as distracting and costly, professors and students alike are increasingly praising the Apple product for its versatility and compactness.

Like several other universities that have tested the iPad, Boston University's School of Management is planning on providing iPads to all its students in its Executive MBA Program beginning in January, having successfully launched the tool this fall, according to U.S. News & World Report.

"Ultimately, we'll be at a point when everyone is going to walk into a classroom with some type of tablet device," said Janice Dolnick, director of BU's Executive MBA Program. "So, we think there's a lot to be learned still in terms of how these can be used."

University officials are looking to integrate the iPad into their MBA curriculums as a way of condensing the immense amount of materials a typical business student must juggle into one portable, hand-held device, Business Week reported.

"Its portability makes the iPad ideal for working professional," said Jane Mutchler, associate dean for academic planning and programs at Georgia State University's Robinson College of Business. "In addition to having texts already loaded, it can be used to keep track of assignments, future tests, study dates and social events, and it has the same type of calendar and email platform that is on the iPhone."

As a trial at the International Institute for Management Development in Switzerland, university officials gave each student an iPad, loaded with presentations, case studies, articles and program information, according to Top MBA. The implementation of the iPad during the program not only fostered a collaborative academic environment for its faculty and students but also substantially reduced the school's paper consumption, suggesting there are environmental benefits to the device.

"Business schools use a lot of paper, so much so that on some programs the cost of the paper is more than the cost of the iPad, so there are clear savings," said Dr. Ian Cooke, IMD's chief technical officer. "However, if it's linked into lectures, as in [IMD's trial] then it becomes more than just a paper replacement."

According to Cooke, the tablet computer's capability to hold masses of information larger than a library as well as update that information in real-time as a lecturer speaks makes it highly useful and unique.

Some students, however, are opposed to using the iPad in the classroom, stating that needing an Internet connection to access materials on the device is impractical.

"During class, I need something quick, and professors talk fast," said Desales University MBA student Vincent Hesener. "[So] unless I whip out a dock with a keyboard, the iPad is difficult to [type] on."

In addition, professors expressed dissatisfaction with the iPad's potential to distract students in class.

"There's a meaningful proportion of b-school professors who don't allow laptops or iPads into the classroom," said Tyler Steben, vice president of custom publishing at XanEdu, a publisher of textbooks and other course materials. "They're afraid students will be playing [games] or using Facebook instead of listening to the case discussion."