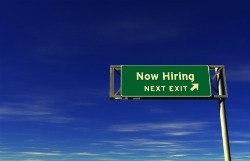 Today's jobs report from the Bureau of Labor Statistics showed some heartening signs of recovery for the United States economy.

Alan Krueger, President Obama's top economic adviser, said in a statement released by the White House that "today's employment report provides further evidence that the economy is continuing to heal from the worst economic downturn since the Great Depression."

The January job gains were higher than any forecasted in a recent Bloomberg survey of 89 economists, whose estimates ranged from 95,000 to 225,000. The new jobs were primarily seen in the private sector, particularly in industries such as manufacturing, professional and business services, and leisure and hospitality. Government payrolls, meanwhile, fell by 14,000 in January.

"We are hiring quite rapidly now, all in sales and service," said Vivek Ranadive, chief executive officer of California-based Tibco Software Inc., who was quoted by Bloomberg. "It's a good time to hire."

The average work week remained at 34.5 hours, while average hourly earnings increased 0.2 percent to $23.29. The underemployment rate, which refers to part-time workers who would prefer to be working full-time and people who want to be employed but who have given up working, fell slightly from 15.2 percent to 15.1 percent.

The underemployment rate remains a persistent problem. "You have an interesting situation where you have some permanent part-time workers," said John Silvia, chief economist at Wells Fargo, who was interviewed by The New York Times. "These people are in jobs and the jobs are not likely to become full-time. That's just a new flavor of the labor market."

Meanwhile, some economists cautioned that the economy still has a long road ahead. "It's a steady grind in the right direction, but it's a grind," said Omair Sharif, United States economist at the Royal Bank of Scotland, who was quoted by The Times. "You're going to have a situation where you take a couple steps forward and a step backward."

Nevertheless, some pessimists admitted that the January jobs report was very good news indeed. As Massimo Calabresi wrote in Time, the latest employment figures indicate that a turnaround may even be underway in the housing market, because construction employment rose. Moreover, the unemployment rate dipped for those ages 25-34 -- the prime demographic for changing housing demand.

"All in all," Calabresi wrote, "it was a very grim day for serial pessimists, this writer included."