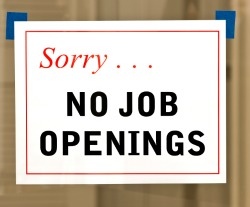 The Labor Department released another disappointing jobs report, which is likely to heighten concerns about the labor market and further the debate over whether the Fed should continue pulling back on its monthly bond purchases.

As reported by the Los Angeles Times, the Labor Department's January jobs report showed that U.S. employers added 113,000 jobs last month, which is stronger than December's gains, but still below economists' expectations of 180,000 or more. The department revised December's numbers upward by a mere 1,000 jobs and November's job growth was revised upward by 33,000. The unemployment rate continued to drop -- in January it fell to 6.6 percent from 6.7 percent in December.

According to The Wall Street Journal, the report had its fair share of good and bad news. For instance, the construction sector added 48,000 jobs in January after losing 22,000 in December. Manufacturing also grew by 21,000 jobs and leisure and hospitality added 24,000 jobs.

The gains, however, were offset by a loss of 29,000 jobs from all levels of the government. Additionally, there were some unusual weaknesses in previously strong sectors. Retail lost 13,000 jobs last month after expanding rapidly for most of last year. The New York Times reported that the health care sector, which has been a bright spot in the labor market for many months barely added jobs last month. In December and January combined, health care added just 2,600 new positions. In comparison, in November the sector added nearly 25,000 new workers to its payrolls.

Economists' reactions to last month's numbers were mixed. While some expressed concerns that the last two reports are signs of a slowdown, others argued it was still too early to make such a call.

"We're not seeing the takeoff that people wanted to see, but it's not a disaster," said Julia Coronado, chief economist for North America at BNP Paribas, in The New York Times. "The 113,000 figure is definitely way below trend, but we want another month or two of data before we can draw conclusions."

The New York Times noted that economists will most likely keep an eye on data to determine why employment gains have not kept up with economic growth as measured by the gross domestic product. One possible reason could be that new technologies are helping employers continue business with fewer workers. Another factor could be the lack of skilled workers as made evident in the 9.6 percent unemployment rate among Americans without a high school diploma. In contrast, the unemployment rate for people with a college degree or higher was 3.1 percent in January.

Some experts believe that the series of recent snowstorms on the East Coast and the arctic conditions across much of the Midwest may also be holding the economy back from its full potential.

"When the economy finally manages to dig out from an unusually snowy and cold winter, activity may strengthen," said Andrew Wilkinson, chief market analyst for Interactive Brokers LLC, as quoted by The Wall Street Journal.

December to January was the weakest two-month stretch of job gains in three years. While more months of additional data would likely still be needed for the Fed to change its plan, The Wall Street Journal noted that such a slowdown could increase scrutiny of the Federal Reserve pulling back on its bond-buying program.

"A continuation of softer-than-expected data for an extended period could prompt the Fed to slow down the pace at which it trims its purchases and extend the duration of the program," said Jim Baird, chief investment at Plante Moran Financial Advisors, in a note to clients that was quoted by The Wall Street Journal.