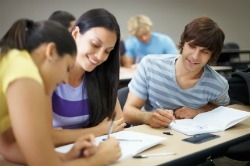 California Governor Jerry Brown signed one half of the controversial Dream Act into law on Monday.

The Los Angeles Times reported that Gov. Brown signed AB 130, a measure authored by Assemblyman Gil Cedillo (D-Los Angeles), allowing undocumented students to receive privately funded financial aid for college. The second half of the bill, AB 131, would grant undocumented students access to public funding, such as Cal Grants and other state tuition aid. The legislative package has been vetoed numerous times by Gov. Arnold Schwarzenegger.

During a ceremony at the Los Angeles City College library, Brown avoided the politics of illegal immigration and instead focused on the need to maintain higher education funding.

"At the end of the day, if we're going to continue as a powerful, equal-opportunity society, we're going to have to invest in our people," said Brown as quoted by Reuters.

Opponents of the measure have argued that funding would be unfairly taken away from U.S. citizens, many of whom are struggling to pay for college.

"People would say, 'Why should we, when we're having tough economic times ourselves, pay for someone who is here illegally?'" questioned Patrick McDonough, a Republican member of the Maryland House of Delegates who helped lead a petition to repeal the initiative.

However, according to SF Gate, though higher education officials do not have statistics on how many students would benefit, it is believed that only a small number would be affected across all systems--UC, CSU and community colleges. Furthermore, because private scholarships have specific restrictions on who can receive funding, the law does not make students eligible for all private financial aid.

When asked about the other part of the Dream Act, the Los Angeles Times noted that Brown refused to go into details.

"I think we ought to wait until it gets to my desk," Brown said.

According to SF Gate, the law will become effective January 1, 2012 for current and prospective college students.