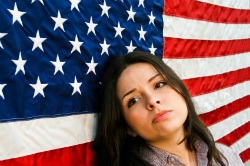 Undocumented students in California could find their opportunities for a college education increasing with the governor's anticipated signing of the second part of a bill known as the California Dream Act.

Illegal immigrants and undocumented students living in the state currently lack access to finanical funding for college, according to Roberto Gonzales in The Huffington Post. The passage of the bill, AB 131, would push the state forward by allowing undocumented students--aptly named "dreamers"--access to state-backed public financial aid.

"I think the underlying feature is that it's good for not only the undocumented students, it's good for our economy and good for our nation," said Dr. David Rodrigues, chair of Chicano students at California State University, Northridge, to the Daily Sundial.

The signing of AB 131 would supplement the passage of AB 130, which allows undocumented students access to private financial aid in the forms of grants and scholarships. The second part of the bill expands financial aid to include state-backed funding. California Governor Jerry Brown signed AB 130 into law in July.

However, significant controversy exists about whether students illegally living in the U.S. should be allowed access to funding. In December 2010, a federal version of the Dream Act was knocked down in the Senate, according to The Washington Post.

Yet, nationwide, some 65 percent of students use financial aid to attend college, noted Gonzales in The Huffington Post. Undocumented students do not have the same access. He believes that the governor's signing of AB 131 would send a message to Washington.

Already, California and eight other states have passed legislation broadening access to education for undocumented students by allowing them in-state tuition fees, according to ABC News. In 2001, the state's AB 540 became law and allowed undocumented students the right to obtain in-state tuition, according to the Daily Sundial. To be eligible, students must have a high school diploma or GED and work toward obtaining legal residency as soon as possible.

Brown's signature on the bill is needed by Oct. 9, according to the Daily Sundial. However, it is anticipated that he will sign the law into efffect due to campaign promises he made during his bid for governor, noted ABC News.