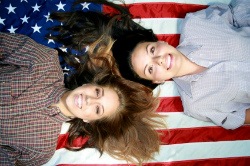 California Governor Jerry Brown signed the second half of the state's Dream Act into law on Saturday, officially allowing illegal immigrants access to state grants to help them pay for college, according to The Huffington Post.

"Going to college is a dream that promises intellectual excitement and creative thinking," Brown is reported as saying in a press release quoted in the Huffington Post. "The Dream Act benefits us all by giving top students a chance to improve their lives and the lives of all of us."

Some 2,500 students are expected to qualify and be able to take advantage of access to the funding, noted The Huffington Post. The California Department of Finance reported that the additional price of providing state funding for these applicants is expected to come to about $14.5 million. This is said to be one percent of the state's entire annual $1.4 billion budgeted for the Cal Grant program, The Huffington Post reported.

The bill is meaningful for undocumented immigrants who have already attended U.S. educational institutions and want to continue on.

"After having invested 12 years in the high school education of these young men and women, who are here through no fault of their own, it's the smartest thing for us to do to permit these students to get scholarships and be treated like every other student," California Assemblyman Gil Cedillo of Los Angeles was reported in the Los Angeles Times as saying.

The Dream Act has been a long time coming in California. The previous California governor, Arnold Schwarzenegger, would not sign the Dream Act into law while he was in office, according to the Gant Daily. However, the first half of the legislation, AB 130, was signed into law in late July by Brown, and gave illegal immigrants the right to seek private forms of aid within the state to pursue a college education. The second half, called AB 131, was passed by the state legislature more than a month ago and merely awaited Brown's signature.

The new law is not without opponents, however. Some say that the state's Dream Act will encourage more workers to illegally come into the U.S. Others say the Act will cost $15 to $40 million merely to implement and would create a further drain on the state's already impoverished budget.

Kirsten Williamson, a spokesperson for the Federation for American Immigration Reform, described the bill "as reckless use of taxpayer money," reported the Los Angeles Times.

However, there are requirements just to be able to apply for the state aid. These requirements include that an undocumented immigrant must have attended school in state for at least three years; been in the U.S. for at least five years; graduated from a California high school; met established academic standards; proof they are working toward legal citizenship and shown a need for financial aid.

According to the International Business Times, the bill is different from the federal Dream Act that fell apart in Congress last year. That bill would have provided illegal immigrants with a pathway for U.S. citizenship while this one--at least at the state level--allows illegal immigrants to go to college while they work toward obtaining their citizenship.

"Dream Act Could Give $14.5 Million to Illegal-Immigrant Students," latimesblogs.latimes.com, October 9, 2011