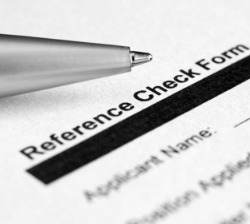 When it comes to preparing resumes, job hopefuls often spend a great deal of time writing cover letters, choosing a resume format and reviewing work histories. A new survey from the job website CareerBuilder.com suggests that many applicants could also benefit from putting additional time and thought into their list of references.

The study, conducted by Harris Interactive from August 13 to September 6, 2012, showed that reference missteps could be unfavorable for job applicants, according to the Central Valley Business Times. The survey showed one in 10 applicants did not list any former colleagues or bosses, and 15 percent did not even warn their references that a potential employee could be calling.

Additional results revealed 62 percent of hiring managers had spoken to references that provided negative feedback. Another 29 percent said they found fake references on a resume, according to a CareerBuilder press release. For reasons such as these, job hopefuls should lay the groundwork to build a list of positive referrals before submitting their resume to a prospective employer, according to CareerBuilder's Vice President of Human Resources Rosemary Haefner. She advised that candidates be sure to include their "biggest cheerleaders" on their references list.

"Before choosing someone, ask yourself 'Did this person understand my full scope of responsibilities? Can he or she vouch for my skills, accomplishments and work ethic?'" Haefner said. "You also want to make sure that you ask your former colleagues if you can list them as a reference. If someone is unwilling, it helps you to avoid a potentially awkward or damaging interaction with an employer of interest."

Job candidates may also be interested to know that many hiring managers contact references before they even call a candidate for an interview, according to the Los Angeles Times. More than two-thirds of hiring managers who participated in the survey said they changed their minds about a potential hire following a call. Of those who changed their minds, 47 percent reported having a less positive opinion of a candidate, while just 23 percent reported forming a more positive opinion, disclosed the Central Valley Business Times.

The Los Angeles Times noted that a full 80 percent of hiring managers stated that they will contact an applicant's former coworker, countering the popular belief that colleagues are often overlooked when it comes to assessing a candidate. As for the number of references listed on a resume, the CareerBuilder press release noted that the bulk of employee respondents, 70 percent, said they provide three or more contacts when applying to a job.

"Why you may not get that job: References on your resume," centralvalleybusinesstimes.com, November 28, 2012