Job Hunting? The Holidays Are A Good Time To Look 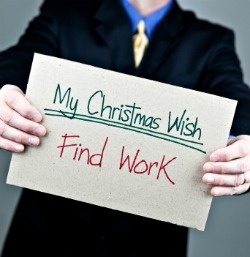 Many career counselors agree that, contrary to popular belief, the season between Thanksgiving and New Year's can be the best time for job hunting.

As The Wall Street Journal reported, the holidays are an ideal period to look for a job precisely because the competition declines so much. That's because many job hunters take a break in late November and December, mistakenly believing that employers are too distracted by the holidays to be hiring new staff.

In fact, some companies are eager to hire at this time of year. Sean Milius, CEO of Management Recruiters of Colorado, explained to The Wall Street Journal that large companies also often have "use it or lose it" hiring budgets that need to be spent by the end of the year. "We've had facilities call us and say, 'We have $100,000 to spend for recruitment and if we don't use it this year, we don't get it next year,'" he said.

Career experts also note that the increased number of social opportunities during the holidays is ideal for networking. "One of the things that is great about the holidays is that you're going to be around a lot of people that you may not have seen all year round," said Michael Erwin of Careerbuilder, who was quoted by WABC-TV. "You need to tap into them as your network, and let them know that you're looking for jobs, because in most cases, somebody is going to know of a job that's out there, and they're going to be able to make that connection for you."

Michael Magatelli, president of the executive coaching firm Magatelli Leadership Group, explained in The Sacramento Bee that it's important to know how to strike up a conversation and not be a "networking shark," whose sole agenda is to look for job leads. He advised job hunters to attend holiday parties, introduce themselves with a smile and handshake, and perhaps make a comment about the guacamole dip or ask about travel plans.

Many people, he told The Sacramento Bee, "think small talk isn't important, but it shows how you communicate, allows people to get comfortable with you" and can eventually lead to a business connection. "It all starts with a conversation," he said.

Magatelli also pointed out that job hunters should take advantage of the fact that executives are more likely to open and read their own mail, since office staff may be on vacation. Thus this is an ideal time to send a handwritten note or a holiday card to a business contact met at a holiday gathering.

"Looking for Work? Keep It Up Through the Holidays," online.wsj.com, December 16, 2011, Lauren Weber

Career and Education News
Home >
News>
Job Hunting? The Holidays Are A Good Time To Look