Job Interview Tips On What Not To Do 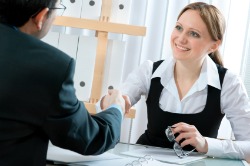 Although the job market has been showing signs of life during the beginning of the New Year, employment opportunities are not guaranteed, especially to those who commit avoidable blunders during their interviews, CNBC reported.

According to United International Press, a nationwide survey of more than 2,400 hiring managers conducted by CareerBuilder found that some of the most outrageous mistakes made in job interviews included discussing how an affair caused a previous job to end and having a friend interrupt the interview to ask, "How much longer?" Eccentric errors aside, the most common pet peeve interviewers encountered was taking a call during the interview, cited by 71 percent of hiring managers, CareerBuilder noted. Sixty-nine percent indicated dressing inappropriately and appearing disinterested also ruined candidates' chances of employment.

Rosemary Haefner, vice president of human resources at CareerBuilder, says that as job prospects improve and the market becomes more competitive, it is crucial that job seekers focus on honing their interviewing skills.

"The good news is that the number of open jobs continues to improve month over month; however competition will remain high for some time to come," Haefner said in a press release. "The goal of any interview is to stand out from other candidates and ultimately land the job, but make sure you stand out for the right reasons. Even though the job search process can be frustrating, candidates should stay positive, focus on their strengths and be prepared on how to best sell their skill set."

In addition, the press release listed appearing arrogant, speaking negatively about a previous employer, chewing gum, not providing specific answers and not asking good questions as reasons employers do not extend offers.

Though the survey's list of critical interview mistakes may discourage some candidates, Haefner says heeding advice from experts on what works during an interview can make a huge difference. Most notably, she says it is vital that candidates research the company before the interview by looking at the press room for recent announcements, the About Us section for company culture and the list of products to become familiar with corporate strategy. Practicing common interview questions with a friend or family member is a good way to calm one's nerves and perfect body language. In addition, if questions come up that candidates do not know how to answer, they should admit they do not know, but then explain how they would go about finding a solution, demonstrating their resourcefulness.

"The Most Outrageous Mistakes Made at Job Interviews," cnbc.com, January 12, 2011, Cindy Perman