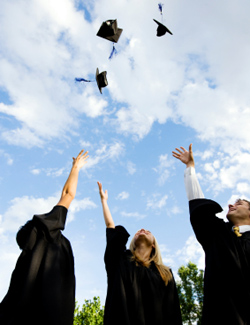 Things may be looking up for new grads. According to a recent study, the job market for college graduates is expected to rebound next year. However, experts cautioned that landing a job will still be difficult.

"Things are starting to look up a little bit," said Phil Gardner, director for CERI, to the Chicago Tribune.

Still, the State News, Michigan State University's student publication, noted that the rebound is just the beginning and far from the robust job market of the late 90s and early 2000s. "There's not enough [jobs] to go around, but it's a start," said Gardner.

According to an MSU press release, geographically, the Great Lakes region--Illinois, Indiana, Michigan, Ohio and Wisconsin--will experience the most growth, with a 13 percent increase in bachelor-level hiring.

"The national economy is certainly not returning to its previous high production base," said Gardner. "And even though the economy has shown early signs of sustained recovery, the overall job market has remained relatively anemic."

Gardner also pointed out that most of the hiring will occur at large corporations and small, fast-growing start-ups. Mid-sized companies (500 to 3,999 employees) are expected to continue shedding jobs. "These fast-growth companies in many ways represent the new economy... This is an important group for our students getting jobs," said Kelly Bishop, MSU's career services director.

According to the State News, however, seniors will need to move quickly if they want to secure a spot at one of their top companies. Gardner stated that employers are coming to campuses early to find the top talent and "probably won't be back in the spring".

Sophomores and juniors are also encouraged to start thinking about their careers and pick up internship opportunities. National data shows that students who have completed internships usually have less trouble finding a job after graduating and also earn higher salaries than those who have not held internship positions. Furthermore, in the press release, Bishop noted that large companies tend to find 50 to 75 percent of new hires from their own intern pool.

The good news is that some 36 percent of companies reported that they would consider any major for a position--an all-time high. However, the State News pointed out that students will still have to sell themselves, which is something that most struggle with. "You have to talk about what you learned from any experience you've had, inside or outside the class," explained Linda Gross, associate director of MSU's Career Services Network. "If you can't talk about what you learned from it, it doesn't mean anything to an employer."