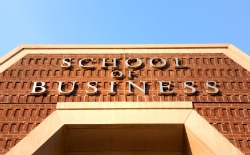 Compared to a few years ago, a smaller portion of students are receiving multiple job offers from employers, who have been recruiting locally to cut costs, The Wall Street Journal reported. The brutal job market has barred entry to many aspiring professionals, with some graduates unable to find jobs months after completing their degrees.

According to MBA Career Services Council President Nicole Hall, this growing trend has led many job-seekers to consider a wider range of companies. In particular, employers in health care, energy and technology have bolstered recruiting efforts, a sign of encouragement to business students who are often disheartened by competitive application processes.

"We still see companies are conservative with hiring and not equal across all industries," Hall said. "But overall, hiring appears to be up. It's still dramatically down from 2007 and 2008. Back then, employers were engaging earlier on, and I'd have a full recruiting calendar. We're nowhere near where we were in the past."

In September, the Graduate Management Admission Council released a survey that polled 828 business school graduates to gauge the economic climate. The results revealed that 88 percent of MBA matriculants from the class of 2010 had a job, an increase from 84 percent of the class of 2009. In addition, starting salaries rose to $78,820 this year from $75,000 in the year prior.

According to FINS, banks and brokerage firms have stepped up recruiting efforts at business programs this fall, believing that the recovering economy will increase their need for qualified candidates.

"Two years ago, I couldn't get a bank to take our calls, last year they were taking them and this year, they're call us," said Maryellen Reilly Lamb, senior associate director of MBA career management at University of Pennsylvania's Wharton School of Business. "That speaks a lot to the cautious optimism of Wall Street at the moment."

To improve the chances that students will get hired, diligent career counselors at business programs across the country have been helping students secure jobs and internships, The Financial Times reported. With recruiters facing the daunting task of sorting through voluminous stacks of applications, counselors have been sending resumes directly to hiring managers, a departure from traditional on-campus recruiting.

"During the economic downturn, we have become more fluid and flexible about how we pursue our employer connections," said Hall, who is also the executive director of career services at Pepperdine University's Graziadio School of Business and Management. "[We] have created a closer link between those relationships and how our career counselors prep and profile our candidates."