Job Numbers Up Thanks to Temporary and Part-Time Employment 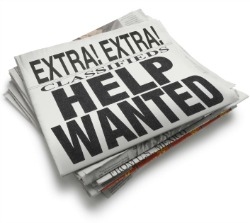 Although job growth is generally seen as good news, the new numbers are creating concerns. The vast majority of the job growth, as Think Progress noted, is taking place in low-wage service industries and temporary employment. In fact, more than 62 percent of the jobs added in June were in low-paying industries such as hospitality, temp services, and retail. The fact that these workers usually go without the benefits traditionally granted to full-time employees raises questions about the economic recovery as a whole. If the majority of jobs being added are temporary, part-time, or low-paying, are they really helping with the recovery at all?

According to the most recent U.S. Department of Labor data, the U.S. now has more temp workers than ever- with 2.7 million workers currently employed in temporary positions, notes Business Insider. The recent surge has turned top temp agencies like Manpower and Adecco into some of the largest employers in the United States. The U.S. Labor Department officials are taking notice of the trend as an increasing number of industries turn to temp agencies for an inexpensive alternative to traditional employment.

According to Maxwell, the huge shift toward temporary workers has taken place over the past 10 to 15 years. Unfortunately, the move toward part-time and temporary employment has left many employees in low-paying positions without the job security or benefits typically afforded to their full-time counterparts.

As Benzinga noted, companies are likely using this strategy due to overall economic concerns. As businesses struggled to remain profitable during the most recent economic downturns, many may have been attracted by the concept of hiring temporary or part-time employees.

While the trend toward temporary and part-time employment may just be a sign of the times, proponents of this strategy believe that it can help businesses stay lean in troubled times. Others argue that temporary work can help prepare individuals for the workforce once a job becomes available. The current movement toward more temporary and part-time workers may also just be a reflection of a permanent change that has taken place in the relationship between the employer and the employee. Ethan Harris, global economist at Bank of America Merrill Lynch, believes that corporate America as a whole might be consciously choosing to remain less committed to employees.

"There's been a generational shift toward a less committed relationship between the firm and the worker," Harris told Benzinga.