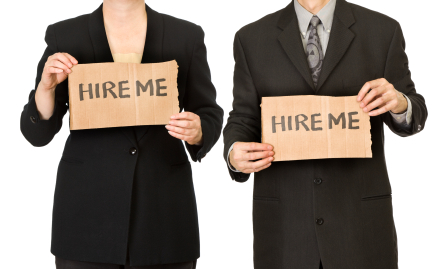 Desperate job seekers fed up with limited opportunities are turning to even more unusual methods to find work.

MSNBC.com reports that some job seekers are creating videos on YouTube, which they attach as a link when applying for jobs. Louis Bernstein, for example, created an eight-minute video of a mock interview using his camcorder. While he hasn't yet landed a job, his video has been viewed more than 100 times.

"My wife thought I was crazy spending time on this when I should be doing the traditional stuff like networking," he told MSNBC.com. "But I need to do something that stands out and separates me from the average bear."

Others have found success using videos. MSNBC.com reports that Eric Romer applied for a marketing manager job at razor company Headblade by creating a YouTube video of himself shaving his head with the company's product. He heard from the company within 24 hours, was flown to California to interview less than a week later, and ultimately landed the job.

In Stockton, California, Dwight Richards has taken to standing at an intersection while distributing his resume to passersby. The Stockton Record reports that Richards, 45, worked as an operations manager for a food company that closed several years ago, and more recently as an independent trucker. But the county's staggering 17.1 percent unemployment rate has made it tough for him to find new work.

"I'm actually energized," Richards told the Record. "As people pass by, I get the honks, the waves, and people give me business cards and take my miniature resume."

In Kansas City, Missouri, Zach Munkris is doing the same thing. Fox 4 reports that before deciding to stand on street corners distributing resumes, the former Marine tried to land a job by creating 14 resumes and sending out 300 resumes. He said that standing in the cold beats sitting at home.

Such unusual job-hunting tactics are becoming more widespread. In August, the Houston Chronicle reported that according to a survey of executives by the staffing agency OfficeTeam, job candidates are using more unusual approaches to get a foot in the door.

But considering the nation's unemployment rate, the methods are not surprising. How bad is it? Harvey Mackay, whose book "Using Your Head to Get a Foot in the Door" will be released next week, told the Arizona Republic that this is the toughest job market he has seen in more than 40 years of coaching people to find better jobs. On a scale of 1 to 10, he rated it a 12 or 13.