July Jobs Report: Unemployment Rate Goes Down But Not Due To Hiring 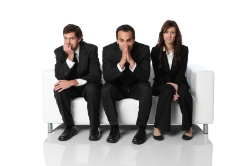 After being hit with negative news about the job market, the Labor Department's better-than-expected July jobs report should help ease concerns, for now at least.

Employers added 117,000 new jobs last month, far better than the 75,000 many economists had forecast and a significant increase over June's dismal numbers, reported CNN Money. Private sector employers added 154,000 jobs in the month, but those gains were offset by a loss of 37,000 government jobs. According to The Wall Street Journal, several major industries also reported gains--manufacturing added 24,000 jobs last month and the construction sector added 8,000. Average hourly earnings also rose slightly to $23.13. After a series of negative economic reports, economists--who were preparing for the worst--welcomed the unexpected news.

Vitner and many other economists, however, noted that the numbers are still nothing to rejoice over.

"It gives us some temporary relief, but all we can say is it's a bit better than the two previous months," said Nigel Gault, chief United States economist at IHS Global Insight, to The New York Times. "I suspect, though, that relief will probably not last too long as people refocus on what they think will happen in the future."

Other reports do suggest that the relief is, indeed, temporary. As The New York Times pointed out, earlier this week, the Commerce Department reported that consumer spending declined in June for the first time in nearly 24 months. Furthermore, although the unemployment rate ticked down to 9.1 percent, the dip was due to people dropping out of the labor force, not a pick-up in hiring. There are still 13.9 million people out of work, 6.2 million of whom have been unemployed and looking for work for six months or longer. Furthermore, just 58.1 percent of the population is employed, which is lower than at any point in 28 years. The overall combination is no recipe for a comeback.

"We're treading water," said Tig Gilliam, president of the North American unit of job placement firm Adecco, to CNN Money. "Companies are very happy being very thin. They don't want to scale back up until it's absolutely essential. And we don't have a consumer spending pace that suggests that is going to significantly change."

The Wall Street Journal reported that President Obama has called on Congress to extend unemployment benefits, which are set to expire at the end of this year, as well as a payroll-tax cut. However, with Republicans worried about government spending, it will be difficult to pass these initiatives.

Career and Education News
Home >
News>
July Jobs Report: Unemployment Rate Goes Down But Not Due To Hiring