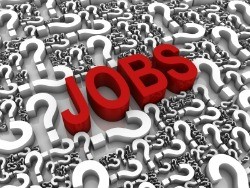 Despite an optimistic report from ADP, the Labor Department's monthly jobs report showed that the job market hit a roadblock in June.

As report by CNN Money, the economy added a meager 18,000 jobs last month--the weakest gain since September. Economists were expecting gains to be offset by more government job losses, but did not anticipate that private sector employers would pull back on hiring so much.

"At first, when I heard it, I thought maybe they had announced the wrong numbers, they were so bad," said Robert Brusca of Fact and Opinion Economics to CNN Money.

Private businesses added just 57,000 jobs last month--the weakest gain since May 2010. At the start of the year, businesses seemed to be ramping up, adding more than 200,000 new jobs each month. However, economists speculated that uncertainty from all angles in recent months has caused businesses to tighten up on hiring again.

"There isn't a single silver bullet--there are a number of factors coming together," said John Silvia, chief economist for Wells Fargo. "The tsunami, floods, higher gas prices, and the stalemate in Washington all create a lot of uncertainty."

After previous disappointing hiring numbers, most economists highlight the bright spots. Ethan Harris, economist at Bank of America-Merrill Lynch, however, pointed out that this month's report had little hope to cling to.

"Every major component of the report was weak," said Harris to The Wall Street Journal. "That doesn't happen very often--usually there's some little ray of hope. The only silver lining is that it might motivate Washington to get its act together."

Indeed, the report showed other economic weaknesses, including lower wages, shorter work week and an unemployment rate that ticked up to 9.2 percent, up from 9.1 percent in May.

The New York Times reported that there are now 14.1 million unemployed Americans. Slightly more than six million have been searching for work for at least six months. Still, most analysts are not yet worried that the economy will slide back into a recession.

President Obama addressed the unemployment issue shortly after the jobs report was released.

"We've always known that we'd have ups and downs on our way back from this recession," said the President. "And over the past few months, the economy has experienced some tough headwinds... The economic challenges that we face weren't created overnight, and they're not going to be solved overnight." President Obama went on to urge Congress to move forward with bills and trade agreements that will produce much need jobs.

According to CNN Money, the U.S. has only gained back about a fifth of the 8.8 million jobs lost since 2007, when the recession began.

"Remarks by the President on the Monthly Jobs Report," whitehouse.gov, July 8, 2011