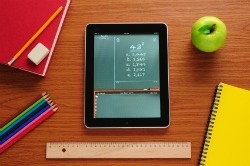 Those who love taking advantage of Khan Academy's free YouTube lectures may be interested in knowing that the company recently released a free iPad app.

As Fast Company reported, the app's features are expected to revolutionize the face of education even further. One of the most notable features is the app's ability to time-sync between devices. The feature will allow users to watch a Khan Academy video on an iPad exactly where they left off on a laptop. The app will also provide parents and educators with information on how students are faring in certain subjects by letting them know how long it took to answer practice questions or whether they appear stuck on a specific section.

The Khan Academy, a free online tutoring site, was initially founded by Sal Khan, who began creating YouTube videos to help his cousin learn algebra, according to CNET. He began posting 15-minute videos to help her, but others also viewed them and commented on how helpful they were.

"I started getting feedback like, 'You know, my child has dyslexia, and this is the only thing that's getting into him,'" Khan told CNET.

Khan quit his job in 2009 to devote himself to the online academy. Today's release of the free iPad app takes the learning one step further. Another feature allows users to download videos to an iPad in order to watch them offline.

"If you're going on a road trip, or if you're taking mass transit and you don't have cell service, or whatever, you can get the content," explained Khan Academy Lead Designer Jason Rosoff to Fast Company.

Time-syncing and offline access are considered to be very useful features since users often replay certain topics or parts of a video to get a better understanding of the material, VentureBeat indicated. In fact, replaying videos is said to be what's so helpful to online learners. As a result, backtracking has been simplified, featuring a list of subtitles as well as time stamps, which, Rosoff pointed out, will allow users to "flip" through the content easily.

While the iPad does not currently support the practice segment of learning, that is expected to become available at some point in the future. Some schools have begun experimenting with the use of iPads in the classroom to gauge the effectiveness of that technology on learning. The Khan Academy could be used in such schools trying out these flexible learning models. The videos have been described as offering a "flipped" classroom, wherein students learn the material online and then work through problems with a teacher in the classroom.

A pilot program in the Los Altos school district in California already uses the flipped classroom model of learning by integrating Khan's online lectures, according to Fast Company.

"Very often, students who thought they were horrible in math, who were labeled bad in math by schools ... in many cases, they were just struggling with a very specific topic," said Shantanu Sinha, President and COO of Khan Academy. "Without the ability to explore lectures at home, struggling students were left behind as teachers progressed through the lesson plan. But when students could focus on problem areas at their own pace, they could overcome weaknesses and catch back up with the class."

Khan has been described as a progressive educator and his work as the "future of education" on a recent episode of 60 minutes, according to The Washington Post. But this is not all-around surprising.

"Innovation never comes from the established institutions," Google Chairman Eric Schmidt said on 60 Minutes. "It's always a graduate student or a crazy person or somebody with a great vision."