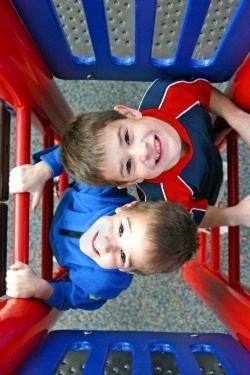 Last month, pediatric occupational therapist and founder of the nature-based development program TimberNook Angela Hanscom penned a post for her company's blog, Balanced and Barefoot, addressing a problem elementary school teachers (and students) frequently face: fidgeting. Children, Hanscom argued, are not moving nearly enough throughout the school day, and it is impacting their physical well being and attention spans. She is not the first to breach the subject. The separation of physical activity and learning in today's classrooms is a major talking point among education reformers who question whether better standardized test scores are more important than giving students the chance to engage in physical, old-fashioned, unstructured play outdoors. But according to a recent article from The Hechinger Report, physical activity and classroom-based learning need not be mutually exclusive. In fact, children may learn best when teachers embrace both, with a little help from technology.

The idea that the mind is separate from the body is an old one dating at least to Descartes, reported The Hechinger Report, but new research in the fields of cognitive science, neuroscience and psychology challenge the notion by suggesting that children actually think through their bodies. This theory, called "embodied cognition," provides fodder for those who argue that kids need to spend more time on the playing than sitting in chairs, but according to the report, studies suggest that teachers can apply the same principles in the classroom by using learning technologies that integrate physical movement. Think: Nintendo's Wii meets physics education.

There are a number of ways movement-based technologies promote learning. According to The Hechinger Report, research suggests that moving while learning enhances knowledge acquisition and recall, and may allow students to release some of what the report calls "cognitive load," which is the ability to keep track of information mentally. Instead of trying to discern which way gears in a machine will turn by thinking about it or viewing an illustration, which can be mentally taxing, children could just play with gears.

There are a number of studies to support this, many of which come from teaching colleges. John Black and Margaret Chan of Teachers College, Columbia University, for instance, authored a 2006 study published by the Association for Computing Machinery that found that physically manipulating an animation of a roller coaster was a more effective way to teach students about gravity and energy than texts so frequently used today. Even subtle movements count: In a separate 2011 study published in Computers & Education, Black and Insook Han, of Hanyang Cyber University in South Korea, showed that students who manipulated virtual gears on a computer screen using a joystick better understood and retained the concept of force. The richer the computer experience, the more effective it was.

Just as learning and moving are not mutually exclusive, neither are playground- and classroom-based physical learning. As Hanscom pointed out, even unstructured physical activity is associated with learning gains. Children who do not have the freedom to roll down hills, spin in circles and climb trees, she argued, often exhibit poor core strength and balance, which lead to more fidgeting (and less attention). When children play outdoors, they nurture the healthy sensory systems that support higher-level attention and learning. This, Hanscom noted, is becoming "a real problem" -- one both parents and schools need to address.

"These children need to move!" wrote Hanscom. "Recess times need to be extended and kids should be playing outside as soon as they get home from school."