Knight Commission Tries To Restore Balance Between Academics And Athletics 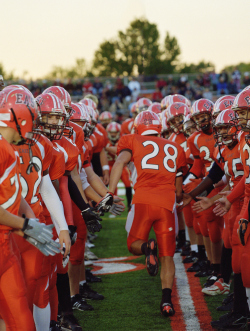 Are colleges spending too much on athletes? According to the Knight Commission on Intercollegiate Athletics, a nonprofit group of current and former university presidents and former athletes, they definitely are. The commission recently issued a comprehensive report on the current state of intercollegiate athletics in an effort to restore financial balance between academic and athletic spending across the nation.

Intercollegiate sports is a big business and universities are putting more and more emphasis on winning games, gaining television market share and maintaining brand image. BusinessWeek reports that the Knight Commissions' 18-month-long study shows that between 2005 and 2008, athletic department spending increased 37.5 percent, bringing the median average to $84,446 per athlete. University spending, on the other hand, increased by 20.5 percent to a median average of $13,349 per student.

When the commission looked at schools by conference, it found that departments were spending five to 11 times more per athlete than the university was spending per student. The biggest difference was found in the Southeastern Conference where schools spent an average of $13,410 per student and $144,592 per athlete. Furthermore, the commission estimates that the budget for top athletic departments, which serves about 600 athletes, will exceed $250 million in 2020.

William Kirwan, co-chairman of the commission and the chancellor of Maryland's university system, told the New York Times that the situation "is basically a financial race to generate more and more money to support intercollegiate athletics [at] a time when our institutions are under such incredible pressure to maintain the integrity of their academic programs."

According to USA Today and The Christian Science Monitor, the commission calls for colleges to put a greater emphasis on academics and to shift the way they treat athletes. The Knight Commission believes this should start with greater transparency between schools and the public by requiring reports on athletics spending and revenue. The group also recommends a reduction in scholarships and the creation of an Academic-Athletics Balance Fund to be shared among all Division I schools that meet a certain criteria. Lastly, the commission wants eligibility for postseason play to be dependent on academic progress rates that would translate into a 50 percent graduation rate. "There must be a bright line between college and professional sports; these recommendations will help to better distinguish that line," said Leonard Elmore, former college and pro basketball player and now member of the Knight Commission.

"Restoring The Balance: Dollars, Values, and the Future of College Sports," knightcommission.org