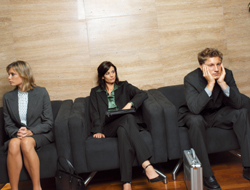 The Labor Department's August jobs report showed that hiring is picking up, but it is still not enough to significantly boost the economy. According to CNN Money, the economy lost a total of 54,000 jobs in August, much less than the 120,000 jobs economists surveyed by Briefing.com had predicted. Sung Won Sohn, economics professor at California State University Channel Islands, said, "It is a sigh of relief" as the number helps reduce the fears of a double-dip recession.

President Obama and other economists, however, once again said last month's growth is not enough. "The economy is moving in a positive direction. Jobs are being created. They're just not being created as fast as they need to, given the big hole that we experienced," said the president. Indeed, CNN Money pointed out that approximately 150,000 jobs a month are needed to keep pace with population growth and even if economic growth continued, it would take years to recover from the 8.4 million jobs lost in 2008 and 2009.

Private companies added 67,000 jobs last month. This number was up from the modest gain of 44,000 jobs that economists forecasted and made August the eighth consecutive month that businesses have added jobs. The bulk of job losses came from the public sector, as state and local governments cut 121,000 jobs, including 114,000 temporary census workers and 7,000 jobs from cash-strapped states.

According to The Washington Post, the unemployment rate rose slightly to 9.6 percent, which was the first time since April that the unemployment rate increased. The increase was not a result of more jobs lost, however. Instead, it was due to 550,000 people entering the labor force, a reverse trend from the month of July.

The New York Times reported that healthcare was the strongest industry, adding 28,000 jobs in August. Furthermore, the industry has experienced steady growth all year, adding an average of 20,000 jobs a month.

President Obama is expected to announce a "package of ideas" next week to encourage more hiring across the board. Although he has not been explicit about his plans, he has called for Congress to pass a stalled bill that would give tax breaks to small businesses and create a $30 billion loan program to encourage community banks to lend. Republicans have blamed the slow economic recovery on President Obama's stimulus spending as well as his healthcare and financial industry reforms and are hoping to reclaim both the Senate and the House during November's midterm election.

Economists argued that the problem is circular--consumer demand needs to pick up, but that is mostly dependent on whether people have jobs and make enough money to spend.

Businesses, however, remain hesitant to hire as corporate profits have been achieved by cutting costs and jobs. Additionally, companies are unsure of how future policies will affect their businesses and, thus, their hiring plans.