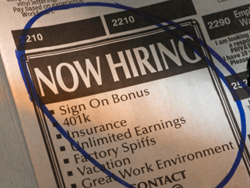 Today's February Jobs Report from the Labor Department is one of the best reports in a while. Still, despite the good news, some experts feel the economy is still not in the clear.

As reported by CNN Money, employers added 192,000 jobs in February. The private sector had its best hiring month since April, adding 222,000 jobs, while state and local governments continued to cut back, shedding 30,000 jobs. According to The New York Times, local governments have cut 377,000 jobs since September 2008, when government employment was at its peak.

As CNN Money pointed out, this was the most broad-based gain in employment since 1998. Professional and business services firms added 47,000 jobs, manufacturers added 33,000 jobs and the healthcare sector added 36,200 jobs, reported The Washington Post.

"Economic recoveries can be like a snowball rolling down a hill, in that it takes time to get some momentum," said John Ryding, chief economist of RDQ Economics, to The New York Times. "People hesitate until they feel that the recovery's durable enough, and then they have a tendency to jump in. Maybe we're finally getting to that jumping-in moment."

Some disagreed, however, and cautioned that more still needs to be done.

"The overall trajectory of the economy has improved dramatically over the past two years, but there will surely be bumps in the road ahead," said Austan Goolsbee, the chairman of the White House Council of Economic Advisors, to CNN Money.

Indeed, The New York Times stated that while adding 222,000 jobs is significant, even if the country continues to add 200,000 jobs a month, it would still take more than three years to make up for the 7.5 million jobs lost since December 2007. Furthermore, February's numbers are likely to be the result of a bounce back from January, when severe snowstorms shut down offices and factories across the country.

Economists expect the unemployment rate to rise temporarily, as job growth encourages more workers who have stopped job hunting to return to the labor force. Currently, just 64.2 percent either have a job or are actively looking, the lowest participation rate in 25 years.

Rising prices for food and energy may also stifle job growth. As those prices go up, consumers and businesses will have less money to spend on other purchases that could stimulate the economy and thus spur hiring.

Other highlights of the jobs report include teenage (ages 16 to 19) unemployment dropping 1.8 percentage points to 23.9 percent, reported The Washington Post. Broader unemployment, which includes people working part time but want full time jobs and those who have stopped looking for work, also fell, to 15.9 percent, and average hourly earnings increased a penny to $22.87.

Interestingly, noted The New York Times, the percentage of working women dropped to 55.2 percent last month, the lowest since 1988.