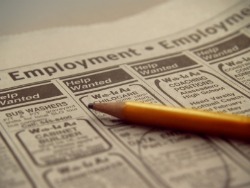 This month's job growth fell far short of what economists had anticipated. According to economists surveyed by CNN Money, the economy was expected to generate a net total of 150,000 jobs in November, compared to the 39,000 jobs employers actually added to their payrolls. This dip marks a significant setback from October, when the economy added more than 172,000 jobs, the Labor Department reported.

"The overall pace of job growth is disappointing," said John Silvia, chief economist of Wells Fargo. Silvia also had high expectations for the economy, forecasting a gain of 130,000 jobs in November.

The blow to the nation's economy was widespread: retailers, factories, construction companies, financial firms and the government all cut jobs, The Washington Post reported. The Labor Department's report surprised economists, who were encouraged by earlier positive surveys that showed busier factories, rising auto sales and a good start to the holiday shopping season in November. These indications did not, however, contribute to mass hiring.

"We shouldn't panic," Naroff said. "In any recovery, it is not smooth sailing."

Due to low hiring numbers, the unemployment rate rose from 9.6 percent to 9.8 percent. This notable economic indicator has stayed above 9 percent for 19 consecutive months, the longest streak to date. Some economists predict that the rate could reach 10 percent by next year.

"November's US employment report is a painful reality check for those hoping that a meaningful acceleration in economic activity is under way," Capital Economics Economist Paul Dales told The Washington Post. "The truth is that the economy is going nowhere at a time when companies are not willing to boost hiring."

According to The New York Times, the longer job-seekers stay out of work, the more trouble they encounter finding a job. Labor Department data indicated that people out of work fewer than five weeks are over three times more likely to become employed than people who have been out of work for more than a year.

"I am so worried somebody will look at me and say, 'Oh, he's probably lost his edge,'" said Tim Smyth, a New York television producer who has been unable to find work since 2008, despite the two decades of experience at companies like Nickelodeon and the Food Network under his belt. "I mean, I know it's not true, but I'm afraid I might say the same thing if I were interviewing someone I didn't know very well who's been out of work this long."