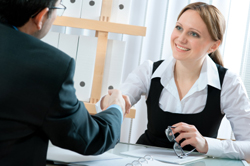 Today's October jobs report is a welcome change--after months of severe losses, the economy finally showed signs of picking up. According to CNN Money, 151,000 jobs were added last month. This is far better than the 68,000 that economists surveyed by CNNMoney.com had projected and on a par with the 150,000 jobs per month that economists have been saying are necessary just to keep pace with population growth.

"The big picture from this report and some of the others recently all points to a pickup in growth in the beginning of the fourth quarter," said John Ryding, chief economist at RDQ Economics, to The New York Times. "The notion that the economy might be double-dipping can now be safely tossed out."

Last month, companies added 159,000 jobs, while the government shed 8,000 jobs--far less than the 148,000 positions the sector lost in September. According to Bloomberg Businessweek, this is the first time this year that the elimination of temporary census workers had little effect on overall numbers.

The New York Times pointed out that within the private industry, education and health services had the strongest growth--53,000 jobs. Retail also helped boost the economy by adding 28,000 jobs. Bloomberg Businessweek noted that this number is expected to increase as companies, such as Kohl's Corp. and Toys "R" Us Inc., add more employees for the upcoming holiday season.

Another encouraging sign was the one-tenth of an hour increase in the private sector workweek, now at 34.3 hours. Like the hiring of temporary workers, a longer workweek is usually an indication of more permanent hiring.

According to CNN Money, President Obama praised last month's long awaited job growth, but acknowledged that "[it's] not good enough." He added, "The unemployment rate is still unacceptably high and we've got a lot of work to do."

Indeed, the unemployment rate remains unchanged at 9.6 percent and the underemployment rate--which includes involuntary part-time workers and people who want to work but have stopped looking--only saw a slight change from 17.1 percent in September to 17 percent last month. Furthermore, although the market needs 150,000 jobs a month to keep up with population growth, at least 300,000 per month are needed to make a dent in unemployment, said Stephen Bronars, senior economist with Welch Consulting.

"There are still a lot of people who have stopped looking for work because there weren't as many hires, and as they come back in, it's going to keep that unemployment rate high for a while," he said.

The New York Times reported that many companies remain hesitant to hire as consumer confidence remains low. Additionally, after the midterm elections divided control of Washington, many feel more uncertain about the future. "When we don't have a clue what two of our largest budget items are, taxes and health care, we've got to keep all the money we possibly have," said Patricia Felder, an owner and secretary-treasurer of Felder's Collision Parts, a small company in Baton Rouge, Louisiana. "We may need it for taxes since we have no idea what we're looking at next year. And we may need it to provide the same level of health care for employees that they got used to having."