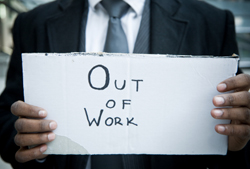 A grim September jobs report--the last report before the next Fed meeting and the November 2 mid-term elections--from the Labor Department showed that the U.S. economy continued to shed jobs and recovery is still sluggish. The New York Times reported that overall, 95,000 jobs were lost in September. Most jobs were cut from the public sector, with government employment dropping by 159,000. A large portion of this decline was due to the loss of 77,000 temporary Census workers. Local governments also cut 76,000 jobs and state governments lost 7,000 jobs, which CNN Money pointed out was the worst decline at the state and local level since 1982.

Most of the state and local jobs were within education. Mark Vitner, senior economist with Wells Fargo explained, "Normally teachers are brought back on in August and September, but because of budget pressures, fewer teachers were hired this year." As a result, The New York Times noted that 72,700 education jobs were eliminated, on net, last month.

According to CNN Money, the addition--and end--of temporary census workers has distorted overall payroll numbers. However, when census jobs are removed from the equation, September was the first month in 2010 that saw a decline in jobs.

The private sector saw an increase of 64,000 jobs last month. Although this is the ninth straight month the sector has added jobs, last month's number was a slowdown from the previous two months. Once again, economists are saying that we are not hiring enough to make a dent in the employment problem.

The unemployment rate--which accounts for people who are actively searching for work--remained unchanged at 9.6 percent. Women continue to fare much better than men, with an eight percent unemployment rate, compared to 9.8 percent for men. The underemployment rate, or the amount of unemployed who have stopped looking for work as well as those working part time and want a full-time position, jumped to 17.1 percent from 16.7 percent in August.

The Wall Street Journal reported the construction sector continued to cut jobs, eliminating 21,000 last month. The manufacturing sector, which once played a key role in job creation at the start of the recovery, lost 6,000 jobs.

Adding to the disappointing news, the Organization for Economic Cooperation and Development recently predicted that the jobless rate most likely will not fall to pre-recession levels until at least 2013. Chief economist at RDQ Economics John Ryding, told The New York Times, "We're looking for companies to get more confident in the pace of recovery and start hiring around 150,000 jobs a month... But I just don't see that happening between now and the end of the year."

According to CNN Money, health care was once again the strongest industry, adding 32,000 jobs last month. Temporary jobs also spiked as companies continue to hold back on hiring full-time workers. "We continue to see companies utilizing temps, and it's not a great surprise given there's still relative uncertainty in the market," said Cathy Farley, managing director in Accenture's management consulting practice. Usually, temp hiring is a good sign that the economy is on the right track; however, economists say companies should have transitioned into permanent jobs by now.

On a slightly positive note, The Wall Street Journal pointed out that hourly earnings went up by $0.01 to $22.67.