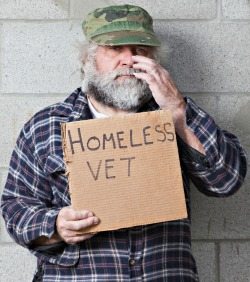 What happens to troops after they return from service? Unfortunately, many of them return to face unemployment and/or homelessness. The U.S. Labor Department plans to change that with its new measure to help veterans.

A press release announced that the U.S. Department of Labor awarded over $20 million in grants to provide job training and support services for over 11,000 veterans. The Labor Department's Homeless Veterans Reintegration Program will award the grants to state and local workforce investment boards, local public agencies, and nonprofit organizations. Some awards will specifically help formerly incarcerated veterans, homeless female veterans, and veterans with families. The purpose of the grants, as Secretary of Labor Hilda Solis commented in the press release, is to "help these heroes find good jobs and take us one step closer to the goal of ending veteran homelessness altogether."

As The Huffington Post explains, the grant program is important because veterans are at a higher risk of becoming homeless than other Americans. A 2011 government study revealed that veterans are 50 percent more likely to become homeless than non-veteran Americans. Moreover, according to a 100,000 Homes Campaign study, the amount of time veterans spend on the streets puts them at a higher risk of getting life-threatening diseases than other homeless people. The Daily Iowan adds that the unemployment rate of all veterans, according to a March 2012 survey by the Bureau of Labor Statistics, was 8.3 percent. The unemployment rate for veterans between 18 and 24 years of age was 29.1 percent. With such high statistics, it is important to use the grants effectively.

The press release mentions that the grants will be used towards occupational, classroom, and on-the-job training, job search and placement assistance, and follow-up services. Recipients must work with several governmental agencies, including the U.S. Department of Veterans Affairs, to help veterans gain employment and fulfill VA's five-year goal to end homelessness for veterans and their families.

How are these grants being used? According to The Daily Iowan, the Shelter House in Iowa City concentrated its efforts on both providing shelter and basic amenities and helping homeless and unemployed veterans in the city find jobs. Examples of organizations that have employed former Shelter House members include the American Legion, the Marriott, and Java House.

Matthew Glynn, a U.S. Air Force veteran who used job training services to help him gain employment, shares the veteran perspective on such services in The Huffington Post: "We want to prove that our skills honed in the military, including leadership, perseverence, and dedication to the mission, will provide value to our employers. With a little coaching, the right tools, and a good degree of hard work, we'll get there together."

"US Labor Department announces more than $20 million in grants to provide job training for more than 11,000 homeless veterans," prnewswire.com, July 2, 2012

"Homeless Veterans To Get Job Assistance Thanks To $20 Million In Department Of Labor Grants," huffingtonpost.com, July 3, 2012