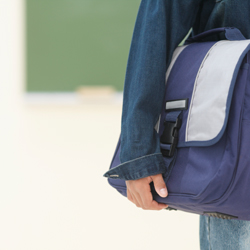 Robert F. Kennedy Community Schools campus, which will house 4,260 K-12 students, is one of 17 new LAUSD school sites that opened Monday. RFK is unique, however, as the 23-acre campus on Wilshire Boulevard has six different learning centers, an underground garage, swimming pool and a state-of-the-art auditorium. According to the Los Angeles Times, there is also a public park with a solar-powered speaker that delivers old tunes and historic narration. The district intends to keep the park open to the public 24 hours. KTTV FOX 11 reported that the school has been called a "Taj Mahal school because of its size and price".

According to NPR, the new school was the once-swank Ambassador Hotel, home of the famed Cocoanut Grove nightclub, but it also has a less glamorous history--it was where presidential candidate Robert F. Kennedy was shot in 1968 after making a short victory speech the night he won the California primary. With the exception of a few movie and television appearances, the hotel has remained empty since 1989.

The Los Angeles Conservancy fought off several potential buyers, including Donald Trump, in order to save the historic site. However, after several years of suggesting alternatives, the board backed off and let LAUSD proceed with its plans to make way for a campus that totals more than $500 million.

Critics of the school argued, "They could have built a good school for a lot less", according to NPR. The school is said to have professional-quality science labs and a chic faculty dining room, which was designed by Los Angeles's most prominent African American architect, Paul R. Williams. According to the Los Angeles Times, the school also has six artworks that cost $1 million.

Preservationists noted that almost nothing was done to preserve the Ambassador's iconic structure. Linda Dishman, executive director of the Los Angeles Conservancy, described the new building as "a lost educational opportunity".

Proponents, however, argued the school is long overdue. RFK is opening its doors to one of the poorest parts of California, reported NPR. "It's a great facility and our kids deserve it, our community deserves it," said Georgia Lazo, principal of one of the K-12 schools on campus. The Los Angeles Times explained that these students have been bused outside the area for years or had been crowded into campuses that suffered from shortened academic school years.

Paul Schrader, who was an aide to Kennedy, told NPR that Kennedy would have approved of the new campus. "Part of his legacy was to give poor kids a decent education, which would help break the cycle of poverty. That's really what these schools are all about: giving kids a chance," he said.