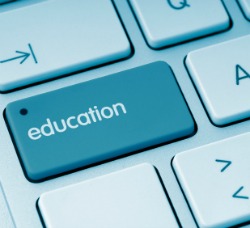 Last month, a dozen educators met in Palo Alto, California, to discuss the rapidly evolving world of online education, including a need to protect students -- and their rights -- from being overlooked along the way. The result: A digital Bill of Rights designed to "inspire an open, learner-centered dialogue around the rights, responsibilities and possibilities" within Web-based learning.

According to The Chronicle of Higher Education, the group's participants included several well-known names in online education circles. Among them were Sebastian Thrun, co-founder and CEO of Udacity, and Philipp Schmidt from the MOOC (massive open online courseware) provider Peer 2 Peer University. Their participation may come as somewhat of a surprise because it is precisely the rise of MOOCs that created the need to discuss the protection of online learners in the first place.

"The problem is, it's been such a short time span and there's so much hype around MOOCs, and some of the terms and agreements around MOOCs are so ill defined and changing and amorphous that no one knows what the business models are," Duke University English professor and participant Cathy Davidson told the Chronicle. "The idea is to have a larger conversation about this so that MOOCs don't become the Facebook or Instagram of higher education -- where you sign up for some free service and it turns out that you're the product being sold," she said.

In the document, titled "A Bill of Rights and Principles for Learning in the Digital Age," authors tackle such issues as students' privacy and intellectual property rights, as well as the need for more quality assurance and transparency in MOOC-related financial matters and educational outcomes.

Thrun told the Chronicle that his participation in the project is not meant to be an endorsement on behalf of Udacity; rather, he hopes the proposed document can generate discussion not just within the education-services industry, but also among traditional colleges and universities.

"There's a whole bunch of universities that use online education as a cash cow," said Thrun. "One of the questions that has arisen is that, if you can actually save money online, can you pass along those savings to the student?"

Inside Higher Ed notes that the group's efforts were not without critique, particularly among education experts who note that the meeting did not include any of the individual learners the document is designed to protect. The authors say that their goal is to just initiate discussion on students and their rights; other groups are encouraged to participate.

Schmidt told Inside Higher Ed that the document wasn't at all intended to resemble a final version. "If the result is a big conversation that gets people engaged and involved, including self-learners, then it's a success."

"A Bill of Rights and Principles for Learning in the Digital Age," github.com, January 23, 2013, Audrey Watters, Mark Chang