Legal Ruling Against Unpaid Internships Will Not Have Clear-Cut Results, Experts Say 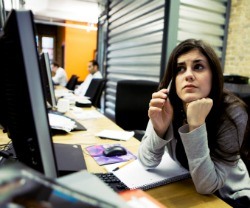 Unpaid internships. To some students, they represent valuable educational experiences -- to others, a means of exploitation. When the U.S. District Court recently ruled that a prominent movie studio should have paid two of its interns, the latter group hailed it as a victory. There is just one problem: Those "interns" were not even students, a distinction some experts argue is key -- especially where truly academic internships are concerned.

In June, the U.S. District Court ruled that Fox Searchlight Pictures Inc. was wrong not to pay two interns working on the set of the movie "Black Swan," stating that their work amounted to that of a regular employee. Inside Higher Ed notes the ruling gave a boost to an already raging legal movement against unpaid internships, and more suits have been filed since. The fact that the workers in question were not even students has not been lost on some experts who warn that conflating volunteerism with internship sets a dangerous precedent.

"With a true academic internship, there is a built-in accountability between the institution of higher education, the employer and the student," Michael True, director of the internship center at Messiah College told Inside Higher Ed. "There are nonprofit organizations that can hardly afford to pay their own staff, much less pay an intern. But they get a great experience and the students who are able to do it participate in those and benefit from them."

The Black Swan case is not the only one making the rounds in the internship debate. According to New York Magazine, fashion designer Alexander McQueen recently came under fire when one of his studio managers sent an email to design schools in London requesting a "talented knitwear student" intern who would receive no pay apart from travel expenses and lunch vouchers. Shelly Asquith, the student-union president at the University of the Arts London where McQueen once studied, published an open letter denouncing unpaid internships. McQueen quickly issued an apology, clarifying that the intern would be compensated in school credit. (Note: Unpaid internships are technically illegal in the U.K.)

Relevant or not, these cases have brought the American internship system into the spotlight. Crain's Detroit Business notes that they are unlikely to have a wide-reaching impact on employers, however, since the U.S. Department of Labor has already established the legal guidelines for unpaid internships. Among the rules: Interns cannot displace regular employees and must receive training from the hiring organization, even if it impedes work. Employers, in turn, are not required to pay interns or guarantee them future employment.

Still, Maurice Pianko, director and lead attorney for Intern Justice, told Inside Higher Ed that the line between appropriate and inappropriate unpaid internships is far from clear-cut. He advises companies to pay all their interns to minimize legal risk -- even when they believe they are following the rules. "Corporations employing unpaid interns should certainly be worried about the Fox Searchlight ruling," he said.

"Paid or unpaid? Rules on interns are clear; it pays to know them," crainsdetroit.com, August 5, 2013, Gary Anglebrandt