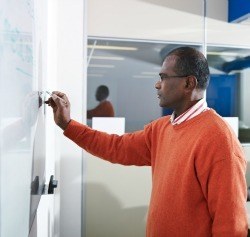 Part-time adjunct professors at Lesley University in Cambridge voted to move toward unionization, an article in BostInno recently noted. Support from adjuncts tilted overwhelmingly in favor of unionization, with 359 adjuncts voting to unionize and only 67 in opposition. The votes would move Lesley's part-time staff into the Service Employees International Union, or SEIU, through which they plan to negotiate better wages, benefits, and working conditions.

According to a report by the American Association of University Professors, non-tenure track salaries average just a third of what tenure-track faculty are earning, which is just part of the problem. At colleges and universities all over the nation, adjunct professors work without any future guarantee of employment or access to important benefits such as health insurance or employer-sponsored retirement plans. And with adjunct professors playing an increasingly bigger role in higher education, Lesley adjuncts feel that it is time to make a change.

"With part-time faculty making up the majority of faculty, our working conditions are directly related to student success and that's why I'm excited about forming our union today," said Lesley alumnus and graphic design teacher Matthew White, in a statement to Boston.com. "Our union will help Lesley University provide students a richer experience and better education."

By negotiating for better compensation and benefits, adjuncts from Lesley hope to transition from low-wage, low-benefits jobs to careers that provide more stability and higher pay. Lesley adjunct Norah Dooley backed efforts in favor of joining the SEIU with the hope that conditions would improve. According to Dooley, teaching one course per semester as a Lesley adjunct doesn't pay enough to cover her family's health insurance.

"Lesley is exceptional in the way it cares for its students as human beings," said Dooley in a statement. "As an alumna of Lesley, I love my alma mater yet I wish Lesley was equally as exceptional in its treatment of its adjunct faculty," adding that "while the crisis in higher education is complex, it is not intractable."

Not everyone supports an increase in wages for adjunct professors at Lesley or elsewhere, according to Boston's NPR News Station. As Lesley University President Joe Moore pointed out, the expectations for non-tenure track and tenure track faculty members aren't the same, which is why adjuncts are typically paid less.

"There's a service component. There's a scholarship component. And there's a teaching component," Moore said to Boston NPR News. "And that's what yields the full-time work for a faculty member with the salaries that we pay here at Lesley," he said.

"A Very Slow Recovery: The Annual Report on the Economic Status of the Profession," aaup.org, March-April 2012, Saranna Thornton and John W. Curtis, http://www.aaup.org/file/2011-12Economic-Status-Report.pdf