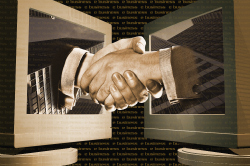 Social media has transformed the way we communicate and connect with one another. Once a popular tool for personal use, companies are now embracing it to grow business. Additionally, in today's grim economy, social networking has become increasingly important to job search success, says CIO.

A Social Recruiting Survey by Jobvite shows that social media has become an important tool for recruiting talent. According to the survey, which asked over 600 HR and recruiting professionals how they use social networking in their recruiting process, 73.3 percent said they currently use social media to recruit candidates. The most commonly used medium is LinkedIn (78 percent), followed by Facebook (55 percent), Twitter (45 percent) and Blogs (19 percent). Jobvite also found that 46 percent of respondents are spending more on social recruiting in 2010 than they were in 2009. As the economy begins to recover, companies looking to hire may need more cost-effective, efficient ways to recruit. That said, social media is likely to continue to be the preferred tool as it is cheaper and easier to use, said Jobvite.

International Business Times adds that social media can also be a valuable tool for job applicants. Because companies are spending more on social recruiting and less on traditional methods, job applicants can gain access to important facts or information not revealed on a company's website. Christa B. Downey, director of Career Services at Cornell University, said that some employers encourage college students to join the company's fan page on Facebook to learn about future employment opportunities. CIO adds that social media can give applicants more access to opportunities at fast-growing companies. Dan Finnigan, CEO at Jobvite, stated that companies that are hiring the most people in the shortest amount of time "are the ones who are more aggressively pursuing social recruiting".

However, because social media is a two-way street, potential employers also have the opportunity to learn more about applicants before making an offer. Downey warns International Business Times readers that because many employers search Facebook and other social media sites, users need to be aware of the materials they put online. According to Jobvite's survey, 32 percent of companies said they "always search" applicants' profiles. Employers also reported that they use LinkedIn the most to research candidates, followed by search engines, Facebook, and Myspace.

Mark Presnell, director of Career Center at John Hopkins, advises students to keep things professional. Mashable also recommends that applicants "present your best self". Applicants should remember that their profiles, photos, status updates, and tweets are public so they need to be careful of what they post. Furthermore, even after joining the company, new hires still need to be mindful of their online reputation. Company networks and Facebook groups are becoming increasingly popular and while colleagues may organize holiday parties and happy hours through these groups, it is still important to maintain a professional identity. "Be conscious of the content, think about what information you want others to see," advised Presnell in International Business Times.