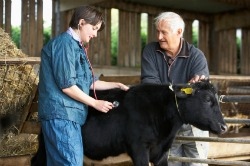 Lincoln Memorial University in Tennessee will soon become the 29th university in the country to have a veterinary college and the first to offer an accelerated degree program for veterinary students, reported Inside Higher Ed.

LMU will open the new College of Veterinary and Comparative Medicine in 2012, which will offer students the chance to earn a bachelor's degree and veterinary degree in six years, as opposed to the typical eight. Ray Stowers, LMU's vice president for health services, told Inside Higher Ed that the program will be "community-based", meaning it will emphasize work in the field with local veterinarians. LMU will not have its own veterinary hospital, as most veterinary schools do. Instead, students will get hands-on experience by working with one of the 30 local veterinary offices.

According to LMU News, large-animal medicine will be the core focus of the new program. The Knoxville News Sentinel reported that the program will serve a huge need as there is a shortage of large-animal veterinarians across the country, particularly in Appalachia, where LMU is located. The U.S. Department of Agriculture is also stepping in to address the shortage--last month, it announced a program that would repay student loans up to $25,000 per year if graduates practiced in specified areas of need, some of which are in surrounding counties near LMU.

"If these holes are going to get filled in the country, it's very obvious for us to be one of those new programs," said Stowers.

LMU's veterinary program will be the first in the nation to offer an accelerated degree, which officials told Inside Higher Ed would cut down tuition costs and attract talented students to the region. Skeptics, however, argued that six years is too short.

Mike Chaddock, a veterinarian and the deputy director of the Association of American Veterinary Medical Colleges, pointed out that LMU students will be "competing with people with bachelor's and master's degrees". Still, Chaddock acknowledged that the program could work, as long as the school is extremely selective in its admissions.

European universities already offer accelerated veterinary medicine programs so the model is not entirely unheard of. Peter Eyre, executive dean of the new college, said that students would be required to take fewer liberal arts courses and while the curriculum would still incorporate ample coursework on writing and communication skills, it would lack some balance. Nonetheless, Eyre stood behind the program.

"We have to weigh the pros against the cons. Right now, the cost of veterinary school is just too high," Eyre said.

According to the press release, Randy Evans, dean of the College of Veterinary and Comparative Medicine, agreed, saying that the six-year program would offer high-quality education at a more affordable cost.

Eyre told Inside Higher Ed that tuition has not been finalized yet, though he expects the cost will be comparable to out-of-state tuition at veterinary schools at state universities--roughly $40,000 a year.