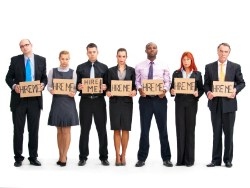 Those who have been unemployed for six months or more -- known as the "long-term" unemployed -- are saying that they face discrimination when applying for jobs.

The discrimination claims are particularly concerning because currently, more than 40 percent of all unemployed job seekers, or about five million people, have been without work for six months or more. As U.S. Federal Reserve Chairman Ben Bernanke pointed out during a meeting with economists, such persistent long-term employment spells trouble because it could ultimately make people unemployable.

"If progress in reducing unemployment is too slow, the long-term unemployed will see their skills and labor force attachment atrophy further, possibly converting a cyclical problem into a structural one," noted Bernanke, who was quoted by Reuters.

According to The Wall Street Journal, more than a dozen states are now considering legislation to make it illegal for companies to discriminate against the unemployed. The proposals include banning advertisements stating that applicants must be currently employed, and even allowing job candidates to sue businesses for hiring discrimination.

Economists point out that people who have been out of the workforce for a long time are frequently viewed as undesirable. "The longer you're unemployed, the more likely you are to be perceived as a risky hire and the less likely you are to get a job," said Gary Burtless, a senior fellow at the Brookings Institution and former U.S. Department of Labor economist, who was interviewed by The Wall Street Journal.

Lynne Sarikas, director of the MBA Career Center at Northeastern University's College of Business Administration, noted in an interview with the Associated Press that some employers may think an unemployed applicant is seeking a job for the wrong reasons: Long-term unemployed applicants, for example, may come across as being desperate for work, and hiring managers may fear that such workers will leave as soon as they receive a better offer.

A new survey has found, however, that the vast majority of employers are sympathetic to job applicants who have unimpressive job histories or large employment gaps. The online survey, which was conducted by Harris Interactive on behalf of Career Builder, found that 85 percent of over 3,000 human resource professionals polled said that they are more understanding of employment gaps. In addition, 94 percent said they would not have a lower opinion of a job candidate who accepted a lower-level position than one held previously.

"More than 40 percent of unemployed job seekers have been out of work for six months or longer," said Rosemary Haefner, vice president of human resources for Career Builder, who was quoted by Forbes. "There's a sense that such a long gap on the resume negatively affects a candidate's chances, but the survey shows that is not true. That's very positive news for this group of job seekers."

Haefner noted, however, that employers look favorably upon unemployed workers who take initiative by volunteering, doing temporary work, or enrolling in classes. Such activities, she said, show that workers are actively utilizing and learning skills.