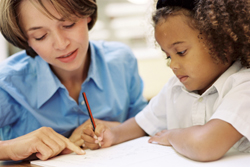 The Los Angeles Times has announced a controversial plan to publish a database of 6,000 third- through fifth-grade teacher ratings on how well students' test scores improved under specific teachers. According to the Los Angeles Times, U.S. Secretary of Education Arne Duncan approves of the plan, stating that parents have a right to know how effective individual teachers are at raising their students' test scores. As Duncan says, "What is there to hide?"

The Washington Post contacted cognitive scientist and psychology professor Daniel Willingham to help explain some of the inherent problems with the database. Essentially, it's based on a "value-added" measure of teacher performance. This means you take a student's earlier test score and compare it to a later one to evaluate how much the student has learned. According to Willingham, this system does work well to analyze schools, but it doesn't work when measuring an individual class. To understand why, consider two equally talented teachers at Parents' Night. One teacher dresses far more professionally than the other. Parents may, therefore, assume the professional looking teacher is better and ask the principal to put their students in that teacher's class. If the principal listens to these requests, then that teacher will have a higher proportion of students with supportive, involved parents - the type of students more likely to do well in school. That initial perception, based on nothing more than the teacher's appearance, then becomes a self-fulfilling prophecy.

According to United Press International, California Education Secretary Bonnie Reiss disagrees with these concerns. Reiss, in fact, plans to encourage more school districts to use the value-added system and to publically release teachers' individual scores. Reiss believes publishing this data is "going to create a more market-driven approach to results."

On the other hand, Frederick Hess, the director of education policy studies at the American Enterprise Institute, thinks publishing this database is premature. He told The Christian Science Monitor, "I'm all in favor of using [value-added] tools, but I think it's way too early in the game to be putting individual teachers' names in the paper with certain scores and suggesting this is a highly informative look at how good a job they're doing."

Many teachers within Los Angeles, the nation's second largest school system, are also fervently against the publication of this database. United Press International reports that the Los Angeles Teachers Union even called for a boycott of the Los Angeles Times.

The Los Angeles Times itself defends the database, saying they analyzed seven years of math and English test scores to determine the impact individual teachers had on their students. Students with the best teachers improved tremendously over just a single year, even in the face of challenges like limited English skills or poverty. The LA Times also feels that since teacher effectiveness has been found to be the most important factor in a child's ability to learn, parents should have access to concrete information evaluating teacher effectiveness.

The publication of this database reveals a growing frustration with ineffective teachers and the poor quality of education some students receive, stated to The Washington Post. Perhaps The Los Angeles Times hopes to goad the Los Angeles United School District into doing something to improve education standards throughout the district. Yet the question remains, is this the best strategy to take?