LSU Partners With Local Brewery To Teach Students About Fermentation 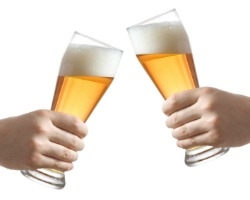 In March 2010, The Daily Reveille reported that Louisiana State University Chancellor Michael Martin wanted to develop a microbrewery on campus. A little more than a year later, the university announced it would launch its very own branded beer, just in time for their fall football season.

As reported by Good Beer Fest, the university is working with Tin Roof Company, which was started by LSU alums through the university's small business incubator, to produce its very own blonde ale. When ready, the beer will be available in cans as well as on draft at local establishments. The beer, however, will not be sold at the university's stadium due to SEC rules, reported Kegs 'N Eggs.

While some may be concerned about the university partnering with the Baton Rouge microbrewery, the university pointed out that the class, which is part of the school's food science training program, will give students a hands-on opportunity to learn about fermentation science. Furthermore, marketing and business students will also have an opportunity to learn from the process as they will be tasked with branding and marketing the new beer, whose name has not yet been revealed. According to the Orlando Sentinel, William McGehee, an LSU alumnus and one of the owners of Tin Roof, said the new beer's target audience is LSU fans and tailgaters.

According to Good Beer Fest, university officials hope the partnership will also benefit Tin Roof and the university--the deal should help expand the brewery's business model and, at the same time, give royalty revenues to LSU.

The Orlando Sentinel reported that this is not the first time a college institution has produced its own beer. Cal, Oregon and Washington all have deals with local wineries or breweries and, according to Good Beer Fest, UC Davis offers a professional brewing program through its new $20 million winery, brewery and food-processing complex.

"LSU to sell its own brand of beer," blogs.orlandosentinel.com, July 21, 2011, Matt Murschel