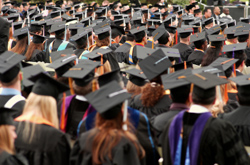 A report by Lumina Foundation for Education, an Indianapolis-based, private, independent foundation, said the United States is not producing enough college graduates to keep the nation competitive in the global economy.

According to a press release, the report is meant to track progress towards Lumina's "Big Goal", which calls for 60 percent of all Americans to hold a postsecondary degree or credential by 2025. The foundation measured progress at the national, state and county levels for each state. In 2007, 37.7 percent of Americans between the ages of 25 and 64 held a two- or four-year college degree. In 2008, that number went up slightly to 37.9 percent. If the current rate of degree production continues, less than 47 percent of Americans will hold a postsecondary degree by 2025.

In order to reach the Big Goal, the U.S. will need to increase the number of high-quality graduates by 278,000 every year. The report pointed out that, at the current rate of degree production, 166,000 more college graduates a year will be needed to hit the Big Goal. "The key is to begin increasing degree production, and to continue to increase it each year until 2025," said the report.

Diverse: Issues In Higher Education noted that although the report does not provide any specific recommendations on how to boost graduate rates, it does state that it is necessary to increase degree attainment among low-income citizens and minority groups. According to The Washington Post, African Americans and Hispanics lag in degree attainment rate at 26 percent and 19 percent, respectively.

Additionally, the press release added that working adults with some college education but no degree could also help boost graduate rates if they completed their degrees. Currently, 22 percent of the U.S. workforce have started college, but do not hold a degree.

In addition to reaching the Big Goal, Lumina believes it is imperative to focus on these groups, as well as first generation students, because they are becoming the majority of the potential student pool.

Although the numbers seem daunting, Lumina is optimistic. "The Great Depression has focused attention on the need to expand access to the skills and knowledge that college degrees and credential present. The opportunity to change the rules of the game and create a higher education system capable of producing much higher levels of attainment is before us," said Jamie Merisotis, Lumina's president and CEO.