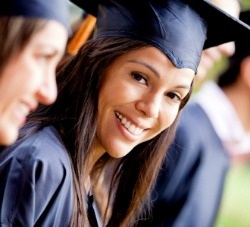 A recent report from the Lumina Foundation, a private foundation committed to increasing the quality and accessibility of higher education in America, showed that the rate of college attainment is steadily increasing across the U.S. However, it is not fast enough to meet the foundation's goal of having 60 percent of Americans earn a postsecondary degree or certificate by 2025, also known as Goal 2025. As a result, the foundation outlined a set of 10 goals to achieve by 2016 in order to progress towards its big goal by 2025, reported Inside Higher Ed.

The Lumina Foundation estimates that 38.7 percent of working Americans ages 25-64 had a two- or four-year college degree in 2011, according to CBS MoneyWatch. This figure is up from 38.3 percent for 2010 and 38.1 percent for 2009. While the steady improvement is encouraging, it is not enough to reach 60 percent by 2025.

"Research tells us that 65 percent of U.S. jobs will require some form of postsecondary education by 2020, yet fewer than 40 percent of Americans are educated beyond high school today," said Jamie P. Merisotis, president and chief executive officer of Lumina, in the foundation's press release. "Our pace of attainment has been too slow and America is now facing a troubling talent gap. If we intend to address this problem, new strategies are required and a heightened sense of urgency is needed among policymakers, business leaders and higher education institutions across our nation."

College degree attainment varied by factors such as location as well as ethnic group. For instance, among ethnic groups, 59.1 percent of Asians have a degree, compared to 43.3 percent of Caucasians, 27.1 percent of African-Americans, 23 percent of Native Americans and 19.3 percent of Hispanics, according to the press release. These gaps are even greater among young adults, ages 25 to 29.

In addition to meeting its 2025 goal, the Lumina Foundation also wants to address these gaps in attainment levels.

"This is an intolerable situation," said Merisotis in the press release. "We certainly must close these gaps to meet the attainment levels that our nation needs."

In order to reach its 2025 goal, Lumina identified 10 targets for 2016. The first goal is that 55 percent of Americans would believe increasing postsecondary education is important for the nation. Other targets include having 67.8 percent of students pursue higher education right after high school, 1.3 percent of older adults pursue higher education for the first time, and 22 million students enroll in college, including 3.3 million Hispanic students and 3.25 million African-American students. The foundation also wants more working-age adults to have some college education, with 48 percent of adult learners completing higher education. Lastly, Lumina aims to have 60 percent of first-time, full-time students complete their degree within six years and for colleges to award 3 million associate and bachelor's degrees a year.

"Who is earning college degrees and who isn't?" cbsnews.com, June 13, 2013, Lynn O'Shaughnessy